Boat Captain to F/A-18 pilot: “Buzz Us Like Tom Cruise Did On Top Gun”

Watch how Boat Captain to F/A-18 pilot: “Buzz Us Like Tom Cruise Did On Top Gun”

Matt Wirt, a U.S. Coast Guard Charter Captain from Wilmington got a surprise fly-by guest on Aug. 29, 2018, after an unusual transmission came over the radio.

As reported by Task & Purpose, in fact, U.S. warship was asking for a radio check, and then asked the 28-foot charter boat named “Killing Time” if it would like a flyby.

The boat was positioned 8 miles north of the Frying Pan Tower lighthouse, and about 40 miles off the coast of Wilmington, Wirt said in an interview with The News & Observer.

“I could hear a U.S. warship talking off and on throughout the day,” Wirt said. “It was kind of weird, they were asking for a radio check. I think they were just parlaying into a flyby.”

After accepting the offer, Wirt said the pilot of an F/A-18 fighter jet joined the conversation.

“They said 2 minutes,” Wirt said. “The pilot came on the radio and did one pass low off our bow that I thought was the flyby. I told him, ‘I thought you were going to buzz us like Tom Cruise did the tower in “Top Gun”.’”

The Naval Aviator told Wirt the first pass was made to verify they had located the intended
boat. 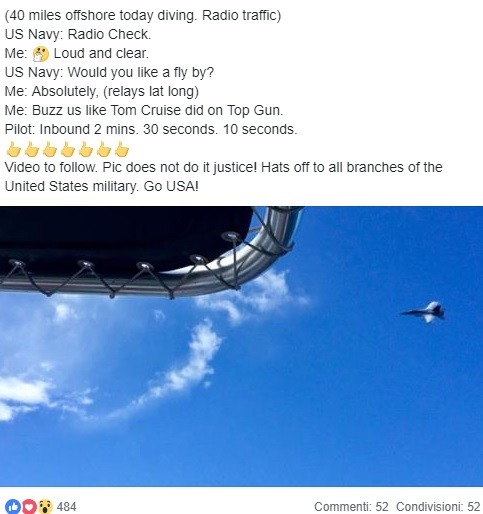 The video in this articles was posted by on Facebook by Wirt and shows the jet flying into the clouds after passing the charter boat. Wirt estimated the flyby was 80 feet off the ocean surface.

“I always tell my customers you never know what you’re going to see out there,” he said. “For all that just to come out of nowhere, it was a ‘proud to be an American’ moment.”
“When the U.S. Navy asks if you would like a fly by the only appropriate response is…. Please buzz us like Tom Cruise did on Top Gun!” Wirt said in one of his posts.