A B-1B nicknamed Star of Abilene was the first example of the bomber to land at Dyess Air Force Base, Texas as part of a delivery ceremony in front of an air show crowd of 45,000. Initial operational capability was reached on 1 October 1986 and the B-1B was placed on nuclear alert status.

The Rockwell B-1B is a long-range, supersonic bomber with variable-sweep wings. It is operated by two pilots and two combat systems officers.

The B-1B is powered by four General Electric F101-GE-102 afterburning turbofan engines. This is an axial-flow engine with a 2-stage fan section, 9-stage compressor, and a 3-stage turbine (1 high- and 2 low-pressure stages).

100 B-1B Lancers were built by Rockwell International’s aircraft division at Air Force Plant 42, Palmdale, California, between 1983 and 1988. As of February 2018, 62 B-1B bombers are in the active Air Force inventory.

Even today, the B-1B is evolving as a weapons platform. The aircraft continues to receive technological upgrades and cutting edge standoff munitions.

The B-1 has come a long way in its first 35 years of combat and has supported the Air Force mission and helped in maintaining the freedom of the United States. And decades later, the B-1 continues to evolve to meet the mission, ready for today’s fight and tomorrow’s needs. 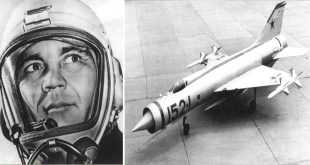