Shirtless Russian sailors casually sunbathe during a Near-collision between U.S. and Russian warships 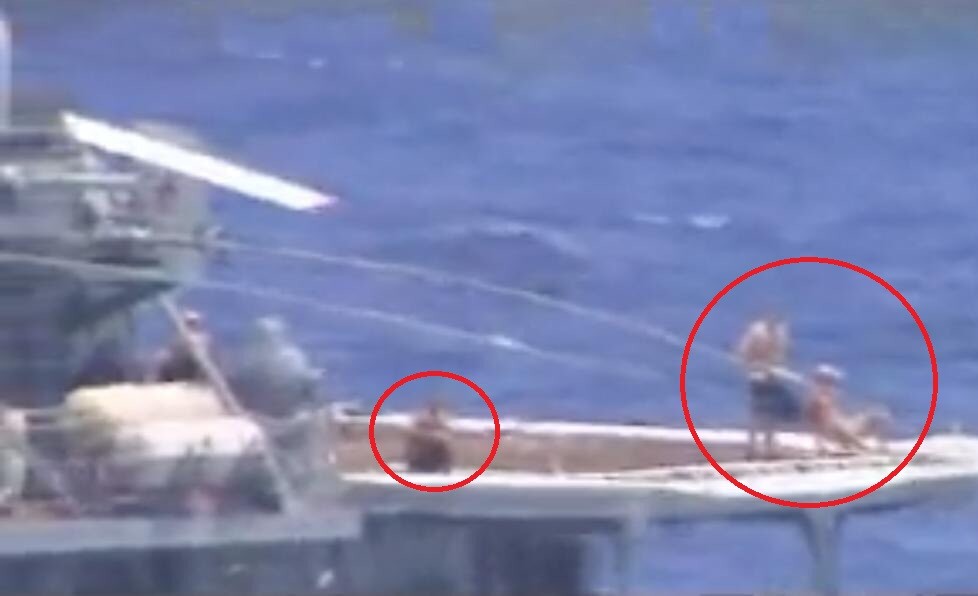 A Russian destroyer nearly collided with an American guided-missile cruiser in the Philippine Sea, the U.S. Navy said on Friday, calling the incident “unsafe and unprofessional.” The Russian Pacific Fleet, meanwhile, blamed the U.S. for the close encounter.

Videos released by the Navy appear to show Russian sailors sunbathing shirtless on the back of their warship during the close encounter. Open link to View Video: Link

Amid the back-and-forth over who is to blame for the latest US-Russia confrontation, eagle-eyed observers took note of something peculiar in the videos released by the Navy — what appears to be Russian sailors sunbathing shirtless, if not naked, as one appears to be, on the helicopter pad.

(Earlier in the day)

Russian sailors: The breeze is blowing, the sun is shining. Time for suntan, da? pic.twitter.com/U7bFzCT70p

NPR reported the unusual Russian behavior in an article discussing the showdown between the Russian and US warships.

“In an odd sight,” the writer observed, “the videos show several Russian service members seemed to be sunbathing on an aft platform aboard the destroyer as it nears the American warship.”

The video is a little blurry, so it is difficult to say for sure.

at time code 1:44 you will see Russian sailors appear to be sunbathing on the back deck of their ship…. https://t.co/yOI0vvnyBS

While Department of Defense and Navy officials noted Russia’s behavior, none were willing to speculate on the record about what exactly the Russians were doing or why.

The US has decided to lodge a formal diplomatic protest in response to this “unsafe” naval encounter, Acting Secretary of Defense Patrick Shanahan said Friday, adding that Russia’s actions “will not deter us from conducting our operations.”

In a statement accompanied by photos and videos of the incident, the US 7th Fleet accused the Russian destroyer Admiral Vinogradov of engaging in “unsafe and unprofessional” behaviour by sailing dangerously close to the USS Chancellorsville, a Ticonderoga-class cruiser.

The U.S. Navy released an aerial photo and dramatic video of the incident.

U.S. Seventh Fleet spokesman Commander Clayton Doss said a Russian destroyer came within 50 to 100 feet of the USS Chancellorsville, “putting the safety of her crew and ship at risk.” Doss said the U.S. ship was “on a steady course and speed when the Russian ship DD572 maneuvered from behind and to the right of” the American warship, forcing it to reverse all engines at full throttle to avoid a collision.

At the Pentagon on Friday, U.S. Defense Secretary Patrick Shanahan called the Russian vessel’s actions “unsafe” but said “it will not deter us from conducting our operations.”

However, Russia blamed the U.S. for the incident and sent a radio message in protest, the Russian state news agency TASS reported.

“The U.S. cruiser Chancellorsville suddenly changed its course and crossed the Admiral Vinogradov destroyer’s course some 50 meters away from the ship. In order to prevent a collision, the Admiral Vinogradov’s crew was forced to conduct an emergency maneuver,” the Russian Pacific Fleet statement said.

The “USS Chancellorsville was recovering its helicopter on a steady course and speed when the Russian ship maneuvered from behind and to the right of Chancellorsville, accelerated, and closed to an unsafe distance of approximately 50-100 feet,” US 7th Fleet said in a statement.

“This unsafe action forced USS Chancellorsville to execute all engines back full and to maneuver to avoid collision.”

Previous Photo and Video of Near-collision between U.S. and Russian warships in the Pacific
Next Here’s All the Douglas C-47 Skytrain aircraft that participated in a Flypast over Normandy on D-Day 75th anniversary