10 Facts You Should Know About Russian MiG-35 fighter jet 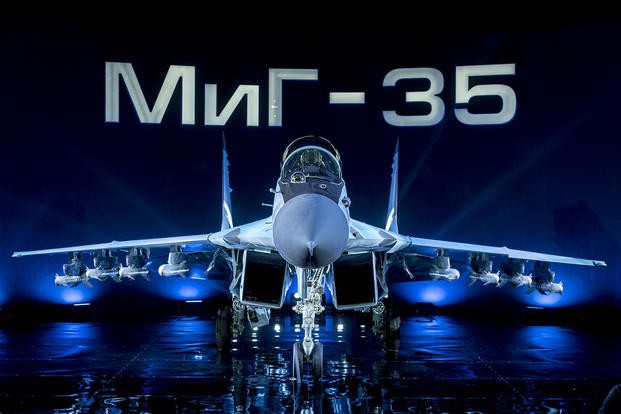 The Mikoyan MiG-35 or Fulcrum-F or Микоян МиГ-35 is a Russian multirole fighter. It is a further development of the MiG-29M/M2 and MiG-29K/KUB fighters.

It is classified as a 4++ generation jet fighter by Mikoyan. The single-seat version is designated MiG-35 and the two-seat version MiG-35D.

The RD-33MK “Morskaya Osa” (Russian: Морская Оса, literally: “Sea Wasp” or Chironex fleckeri) is the latest version of the RD-33. It has 7% more power compared to the baseline model due to the use of modern materials in the cooled blades, providing a higher thrust of 9,000 kgf. In response to earlier criticism, the new engines are smokeless and include systems that reduce infrared and optical visibility. The engines may be fitted with vectored-thrust nozzles, which would result in an increase in combat efficiency by 12% to 15%. The RD-33OVT engine variant comes with thrust vectoring nozzles, and can direct thrust in two directions or planes.

OLS, as well as radar, allows detecting targets and aim weapon systems. But, unlike the radar, OLS has no emission which means – can’t be detected. OLS works like a human eye – it gets the picture and analyzes it. Usually, it’s been said radars are the eyes of the plane. But to be exact, it’s more locator device, like whales have.

But OLS is really the eyes of the plane and they are very sharp. OLS works not only invisible bands. Very important part of “plane vision” is IR picture. NII PP engineers have chosen more short-wave bands for the matrix, which has increased the sensitivity of the complex in several times and has increased detection range greatly.MiG-35 OLS may see USAF stealth planes very nicely as well. Today it’s impossible to hide the plane from the complex of powerful optics with IR vision. This optical system can distinguish targets and aim weapons as well.  Since it has no emissions, it is very silent

4) The number of weapon stations has increased to 10