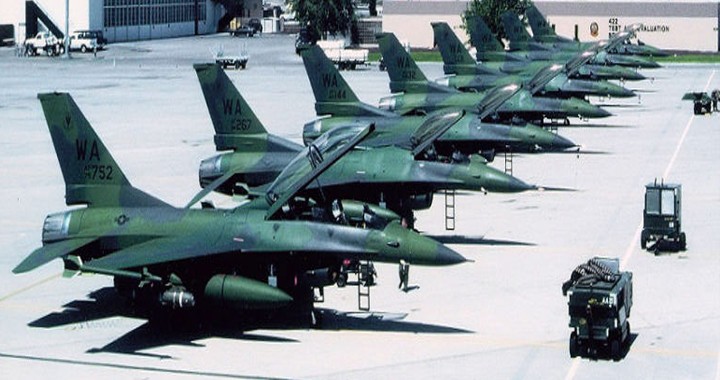 The USAF has been trying to kill the A-10 for as long as the Warthog has been in service. Part of this effort saw the A-10’s huge GAU-8 Avenger 30mm cannon shrunk down into a pod that could be carried by sexier fighters, primarily the F-16.

In the 1980s In the attempt to replace the A-10 Thunderbolt II, the U.S. Air Force (USAF) started to develop A-16, close air support (CAS) version of the basic F-16 Fighter jet.

In 1989, the designation block 60 was reserved for the A-16. The A-16 Block 60 was to be equipped with a 30 mm cannon and provided with a strengthened wing structure for anti-tank weapons such as 7.62 mm min pods.

There were two blocks 15’s that were converted to this modification; they were based at Shaw airforce base.

The  A-16 never went into production due to a Nov. 26, 1990 Congressional directive to the USAF mandating that it retain two wings of A-10s.

The supporters of the A-16 project wanted the USAF to replace its A-10A Thunderbolt IIs with A-16’s, arguing that the A-10 was too slow to survive above a high-tech battlefield. Detractors argued that the A-16 had the insufficient range and load-carrying capability to make an effective attack aircraft, and, in addition, it would be too vulnerable to enemy anti-aircraft fire.

However, all of these plans came to nought on November 26th, 1990, when the USAF was ordered to retain two wings of A-10 aircraft for the CAS mission. No order for the A-16 was ever placed.

The USAF was rather reluctant to let the idea of a dedicated CAS F-16 go and planned to replace its A-10’s with F-16s fitted with a version of the Warthog’s Avenger cannon.

Instead of upgrading the A-10, USAF seeks to retrofit 400 Block 30/32 F-16s with new equipment to perform both CAS and battlefield air interdiction (BAI) missions.

The project which was called F/A-16 featured new systems such as a digital terrain-mapping system and a Global Positioning System (GPS) for improved navigational and weapons delivery accuracy, as well as an Automatic Target Handoff System (ATHS) to allow direct digital target/mission data exchange between the pilot and ground units. This approach, however, was dropped in January 1992 in favor of equipping Block 40/42 F-16C/Ds with Low Altitude Navigation and Targeting Infrared for Night (LANTIRN) pods.

This weapon was carried in a General Electric GPU-5/A Pave Claw gun pod on the centerline station and was supplied with 353 rounds of ammunition. There were also plans to convert F-16Cs to this configuration and to incorporate the A-10s AN/AAS-35V Pave Penny laser spot tracker. The vibration from the gun when firing proved so severe as to make both aiming and flying the aircraft difficult and trials were suspended after two days.

The A-10 Vs F-16 controversy revived during Operation Desert Storm, where both aircraft were used extensively in the war with substantial data on their success rations of various types of missions.

The Block 10 F-16 had the advantage of speed and full night capabilities, whereas the A-10 required the use of flares to light up the battlefield or a second A-10. Yet despite these advantages, the F-16’s performance in Desert Storm was inferior to the A-10 in the CAS role, primarily because the F-16 was extensively vulnerable to ground fire down low.

It did not have the rugged survivability features the A-10 had, consequently the F-16 was forced to fly at higher altitudes. At higher altitudes, the F-16’s weapons were less accurate than the A-10’s Maverick missile and gun strafing capabilities. The 30 mm gun pod attachment for the F-16 proved to be unstable and inaccurate.

As explained by Ken Neubeck in his book A-10 Warthog Mini In Action,  “the war had proved conclusively that the modified F-16 cannot replace the A-10 Warthog and perform all aspects of the CAS mission. The A-10 was truly the only aircraft that was built solely for the CAS mission. Many experts feel that the results of the war show that the U.S. would do well to continue to have a mix of aircraft including the ‘air-to-mud’ types.”