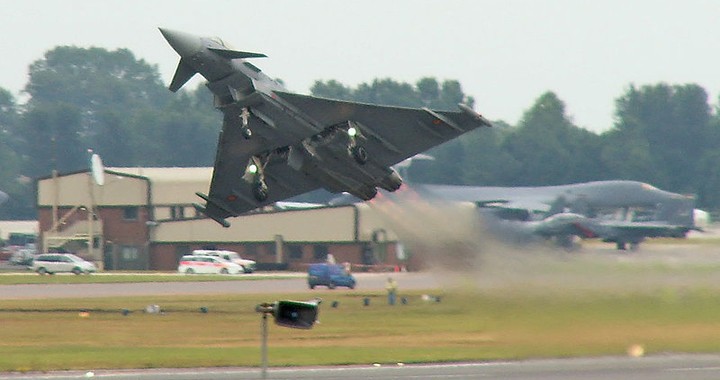 The Eurofighter Typhoon is a twin-engine, canard-delta wing, multirole fighter. The Typhoon was designed originally as an air superiority fighter and is manufactured by a consortium of Airbus, BAE Systems, and Leonardo.

The Eurofighter Typhoon is a highly agile aircraft, designed to be a supremely effective dogfighter in combat.

Later production aircraft have been increasingly better equipped to undertake air-to-surface strike missions and to be compatible with an increasing number of different armaments and equipment, including Storm Shadow and the RAF’s Brimstone.

The Typhoon had its combat debut during the 2011 military intervention in Libya with the UK’s Royal Air Force and the Italian Air Force, performing aerial reconnaissance and ground-strike missions.

The type has also taken primary responsibility for air-defense duties for the majority of customer nations.

The maiden flight of the Eurofighter prototype took place in Bavaria on 27 March 1994, flown by DASA chief test pilot Peter Weger.
On 9 December 2004, Eurofighter Typhoon IPA4 began three months of Cold Environmental Trials (CET) at the Vidsel Air Base in Sweden, the purpose of which was to verify the operational behavior of the aircraft and its systems in temperatures between −25 and 31 °C.