China’s Worst Nightmare: U.S. Deployed B-2 Spirit Bombers to Hawaii. B-2 Spirit bombers recently wrapped up their first-ever rotation to Joint Base Pearl Harbor-Hickam, Hawaii, and executed missions with their F-22 Raptor stealth fighter counterpart, giving pilots a sense of how the two aircraft would pair in a high-threat environment, according to the Air Force.

Three of the bombers and approximately 200 airmen from Whiteman Air Force Base, Missouri, deployed for the six-week rotation as part of U.S. Strategic Command’s Bomber Task Force mission, the service said in an Oct. 4 news release.

“The B-2 Spirits’ first deployment to (Joint Base Pearl Harbor-Hickam) highlights its strategic flexibility to project power from anywhere in the world,” Maj. Gen. Stephen Williams, director of air and cyberspace operations, Headquarters Pacific Air Forces said in a statement. “The B-2s conducted routine air operations and integration capabilities with key regional partners, which helped ensure a free and open Indo-Pacific. The U.S. routinely and visibly demonstrates a commitment to our allies and partners through global employment and integration of our military forces.”

Related Link: Why Almost Nothing Can Stop a B-2 Bomber in Battle

When flying against heavily defended airspace, the Raptors escort the stealthy but comparatively slow and unmaneuverable bombers into enemy airspace.

Working together, the Raptors and the B-2 would kick down the door for follow-on aircraft during an actual air campaign. It was exactly this sort of scenario that the B-2s and the F-22s practiced during the bombers’ deployment to Hawaii. 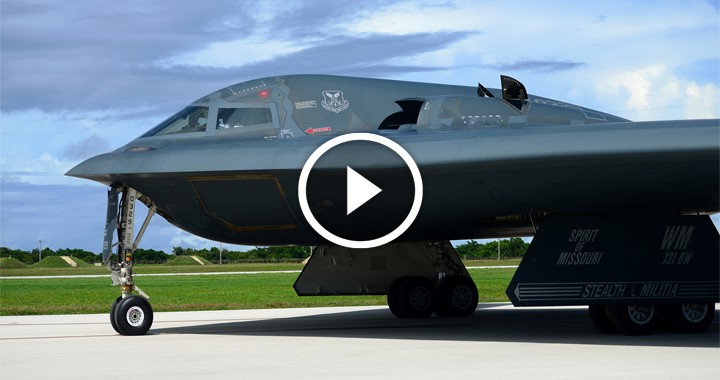 Previous Quadcopter strikes the wing of an aircraft at an impact speed of 238 mph.
Next Russian passenger jet skids on ice suffered the main landing gear collapse