A Youtube channel claiming to be of a Russian pilot of a fighter jet released previously unseen video footage that showed Polish F-16 and MiG-29 fighter jets that intercepted the Russian military plane.

The exact location and time when the video was made are not reported.

It is worth noting that the F-16 fighter of the Polish Air Force was forced to extend the landing gear in order to slow down its progress in relation to the low-speed IL-22 aircraft. 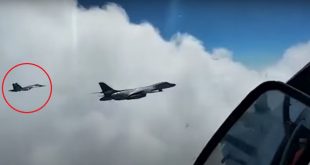