The Royal Norwegian Air Force is the air force of Norway. It was established as a separate arm of the Norwegian Armed Forces on 10 November 1944.

Shocking footage below shows an F-5A Freedom Fighter of the 336 Sqn of the RNoAF (Royal Norwegian Air Force) towing a person on a sort-of sledge on a frozen apron.

According to the user who uploaded the clip to Youtube, “when the technical status of our F-5B two-seaters went low, creative training methods were required. A funny scene from a 336 sqn video showing an F-5 fighter jet towing an instructor giving taxi instructions from a sledge.”

It looks like the personnel of the 336 Sqn based at Rygge, 60 kilometers outside Oslo, in eastern Norway, wanted to exploit the frozen surface of the apron for a joke and hooked a cable and an improvised sledge to the rear end of the F-5 for some fast turns during the taxi operations of the Tiger.

Although the engines were running at idle power for the taxi, at that distance, the person on the sledge, while risking to be crashed on the nearby hangar or against one of the fire extinguishers on the apron, was probably getting some of the exhaust gas and heat…

The video is quite old dating back to a period between 1987 and 2000. Considered that the aircraft in the video shows both the chaff and flares dispensers as well as the light grey color scheme, the clip must have been filmed after 1987. 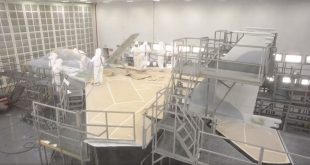