Hollywood action film star Tom Cruise is filming of for the upcoming Top Gun Sequel “Top Gun: Maverick”. In this Article, We will tell you about the latest news  from Top gun Set

Tom Cruise had to cut short the filming of an aerial sequence after a “flap warning” indication appeared in the U.S. Navy F/A-18F Super Hornet he was flying in Monday afternoon, September 17, 2018. The aircraft diverted to an alternate airfield following the incident.

The 56-year old actor was photographed wearing U.S. Navy flight gear and a specially painted Gentex HGU-68/P lightweight flight helmet. The photos were said to have been taken at “an airbase in Nevada” and have circulated on Hollywood gossip and aviation fan blogs including TMZ.com. 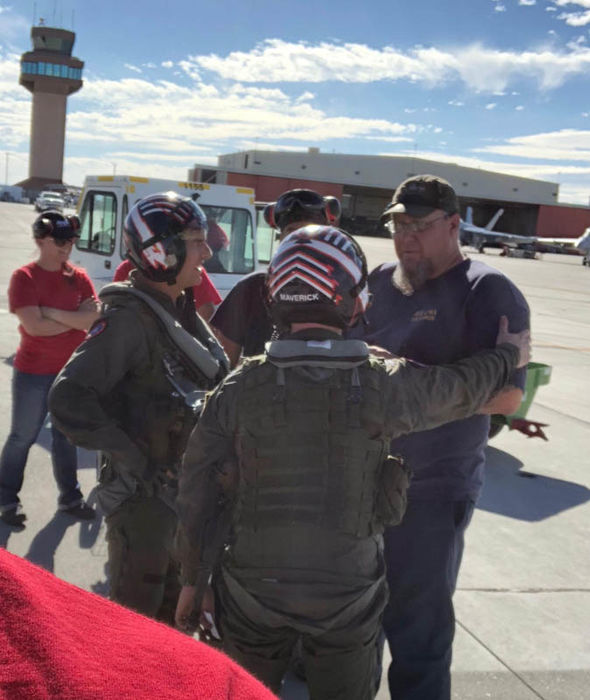 As reported by TMZ, Cruise flew in an F/A-18 with a Hornet driver from an airbase in northern California.

The U.S. Naval Aviator acts as the actor’s double, while Cruise sits at the back of aircraft with
cameras facing his point of view. According to Express, the two were snapped at an airbase in Nevada, having had to make an unscheduled landing after the jet saw a “flap caution” mid-air

Photo leaked from the set proves Maverick is going to use a customized version of the modern @USNavy HGU-68/P flight helmet instead of the old-fashioned HGU-33 shown in the first image image teased by @TomCruise (right image edit from shot leaked here: https://t.co/mFBpWxfwAz) pic.twitter.com/eV6x4NC2ij

However Maverick and his pilot soon flew back to California in another plane though. The actor returns as Maverick in the highly anticipated Top Gun 2. His character is now a flight instructor who will mentor Goose’s son. Noteworthy  Maverick’s ride for Top Gun sequel will be a cool special painted F/A-18F Super Hornet. 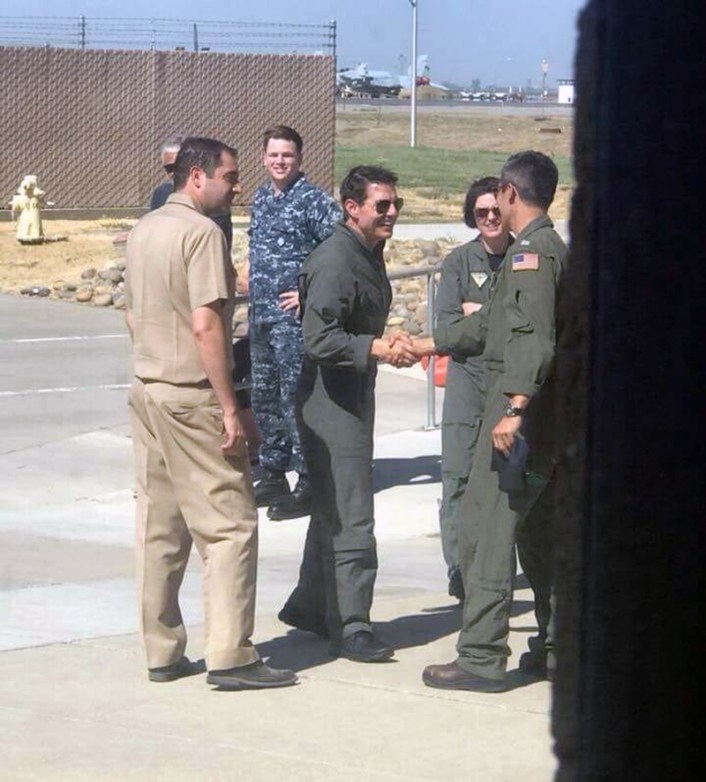 Other photos surfaced on the “Eggs, Bacon and Joey Morning Show” Facebook page that showed Tom Cruise dressed in a flight suit shaking hands with men and women also in military flight suits at Naval Air Station Lemoore in Kings County and Fresno County in Central California. F/A-18 aircraft appear in the background including the tips of the twin tails of one F/A-18 painted in colors that may be similar to the one we showed in a previous update that will be used in the filming of the upcoming “Top Gun: Maverick”.

Word on the street is that Tom Cruise is going to learn how to fly the Super Hornet for TOP GUN 2 – makes an aviation photojournalist look decidedly amateur!

It looks like world-famous actor Tom Cruise isn’t the only old relic who is coming back to the new Top Gun: Maverick film. In the sequel that’s happening more than 30 years after the original movie was released, Kawasaki is also making a comeback in the shape of Cruise’s two-wheeled transportation or should we say Pete ‘Maverick” Mitchell, according to this photo published by People.

Taken on Jun. 1, 2018 the video in this post shows Tom Cruise riding a motorcycle around airfield as Maverick in first pictures from Top Gun: Maverick set.

According to Daily Mail, the bike wasn’t the only vehicle present Maverick is used to handling; also parked at the San Diego military base was one of the F/A-18 Super Hornet fighter jets that will likely feature in the movie.

No “Top Gun” sequel would be complete without the need for speed, and photos have surfaced of Tom Cruise being filmed as Captain Pete “Maverick” Mitchell riding a new Kawasaki Ninja H2R motorcycle on a runway for a possible title sequence that reprises the original 1986 sequence. This new Kawasaki Ninja H2R replaces the Kawasaki GPZ900R that he rode in the original 1986 film. “Maverick”’s new Ninja H2R displaces 998cc’s and has a top speed of (seriously) Mach .327 or between 206 and 249 MPH. 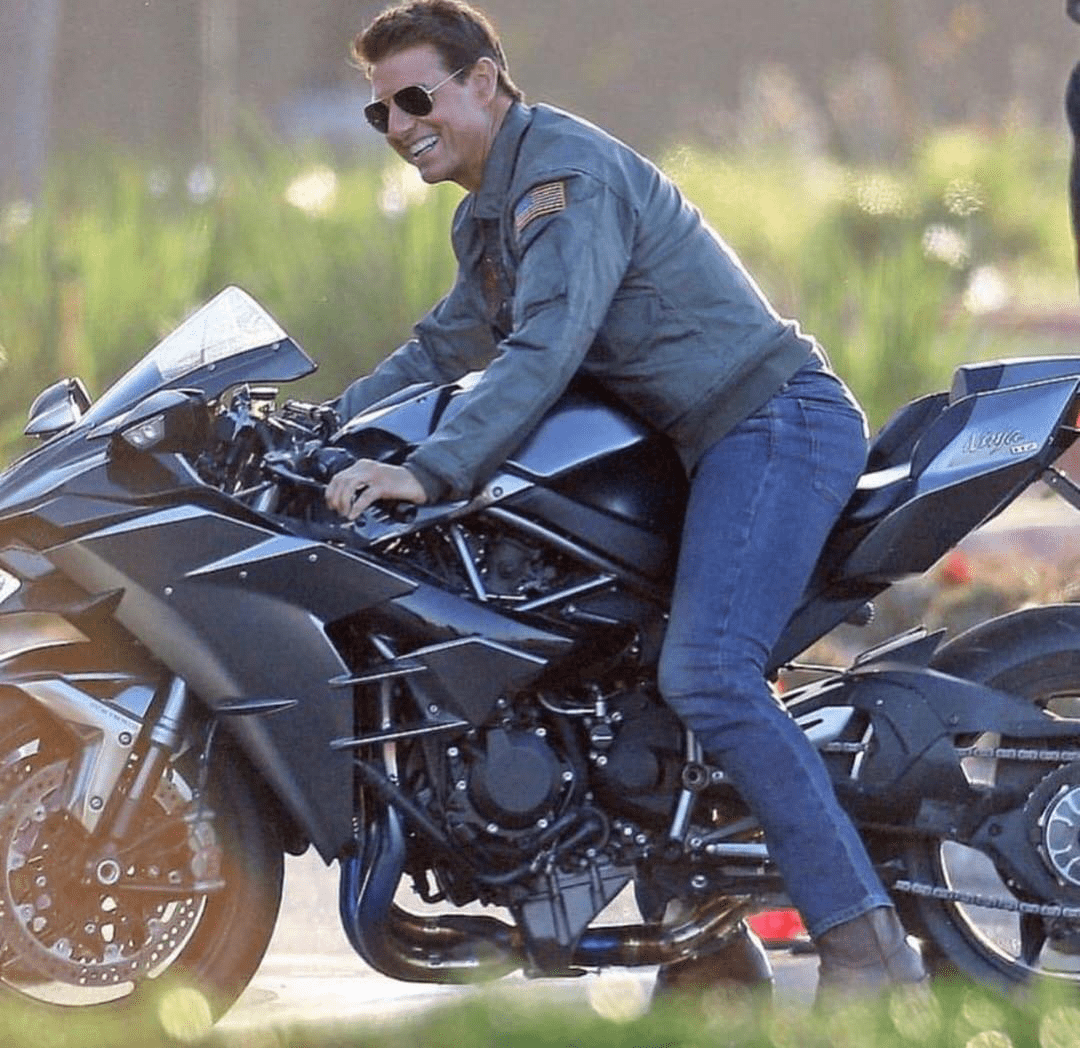 Filming for “Top Gun: Maverick” has also been taking place onboard the U.S. Navy aircraft carrier USS Abraham Lincoln (CVN-72) during August. Film crews from Paramount and Bruckheimer Films were aboard the carrier until Sunday, August 26

Previous The A-10 Is not A Real Tank Killer, Its forgotten F-111 AARDVARK
Next Why the world isn’t buying China’s fancy new weapons