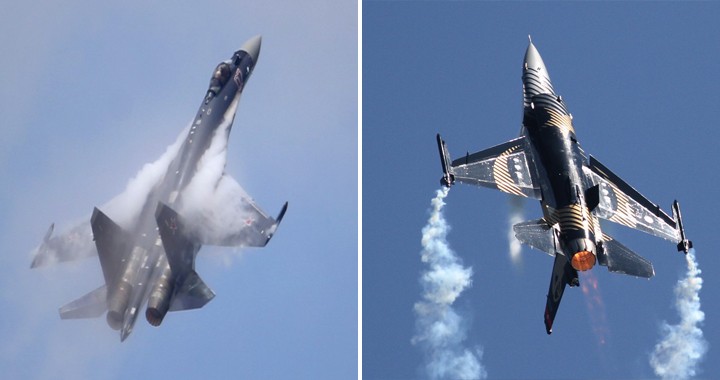 As we have reported earlier that Russia Su-57 and Su-35 Fighter Jets landed In Turkey for Technofest.

Turkey has expressed an interest in Russian fighter aircraft, including Sukhoi’s 4++ generation Su-35 and the new fifth-gen Su-57 stealth fighter, following Washington’s decision not to follow through with the delivery of F-35s to its NATO ally after Turkey’s refusal to scrap its S-400 air defence system deal with Russia.

After watching the Su-35 demonstration at Ataturk airport, Turkish people seemed quite impressed by the flight capabilities of the Russian fighter. In fact, they seem to consider the Su-35 way better than the US-built F-16 already in service with the Turkish Air Force.

“Watching the flight of this plane, I dreamed that this plane would become our fighter jet made at our plant. Today we don’t need the American devil, but the Russian bear is needed.”

“It is much better than the American junk! America doesn’t take anybody except Russia seriously.”

Other users calls to abandon “American junk – F-16” and to replace them with Russian fighter jets.

“At 02:34 ‘Pugachev’s cobra’: an ideal combination of aerodynamics and thrust vectoring.”

“It is unknown whether the Russians will approve the transfer of technologies, but if yes, then 20-30 of such planes must be bought.”

There are also attempts to joke

The pilot took a glass of vodka and boarded the plane :).”