In a new short video that has surfaced on TikTok, apes have been spotted flying drones. The drone is an Autel Robotics Evo and the apes are located in a Myrtle Beach Safari in South Carolina.

In the short video we can see two apes, one standing and holding the controller to the Autel Evo drone, and the other sitting with the drone’s carrying case. The one flying the drone can be seen moving the sticks around to get the drone to rotate in position and moving it back and forth.

The ape looks to be able to fly the drone fairly well and seems to understand that he is in control of it, as it looks down every few seconds at the controller and then back up to the drone. The apes even pose with a smile for a photo, showing the amount of fun they are having flying the drone.

The video is particularly impressive as the ape seems very much in control of the drone. It repeatedly looks down at its remote controller and up at the drone indicating it knows it is the one controlling the unmanned flying vehicle.

What is particularly cute and noteworthy is that both the apes seem to be having a good time as they smile for the camera. Could they also be aware that they are being videotaped?

For now, no further news has been released about the flying-drone-apes and no studies have been done to test whether the animals really know they are the ones flying the drone.

Still, the video is gaining popularity and has now been released on Instagram, about a week after first being spotted on TikTok. What do you think of these amazing apes?

Previous Here Are The Unsinkable Aircraft Carriers Of The World 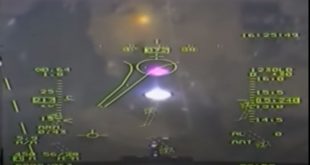 In this article, we will share with you the hilarious Dogfight video. The video seems …