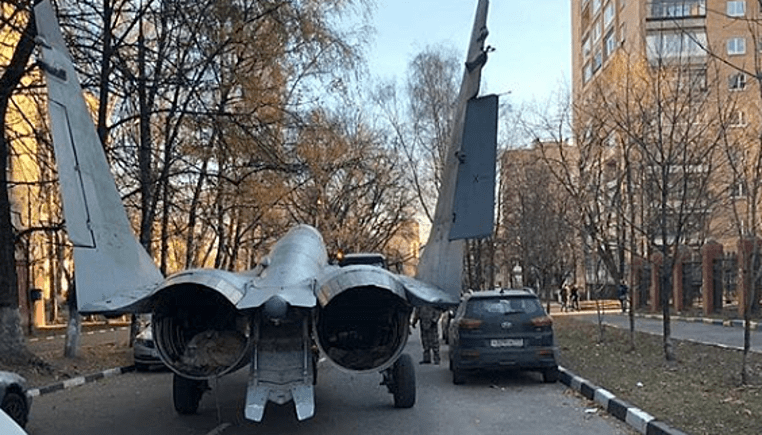 The widely produced 4th generation fighter can be seen literally driving through the street of a residential neighborhood, in Russia.

“The MiG-29 fighter is being transported to the improvement zone near the houses No. 35, 36, 40 along the 3rd Post Office,” wrote Klimanov.

The director of the city management company in the working class Moscow-suburb town of Lyubertsy has posted a short video on his Instagram showing a tractor pulling the MiG, with its wings detached, along a narrow one-lane street in a sleepy neighborhood.

According to local media, the MiG-29 will be installed as a monument at a square near a former airfield of the 16h Fighter Aviation Regiment, which was based in the area during the Second World War and the defense of Moscow. The site was also the birthplace of the Central Research Institute of the Air Force, with thousands of local residents working to strengthen Soviet and Russian aviation for decades, making the MiG-29 monument a fitting tribute.

Earlier, the head of the municipality, Vladimir Ruzhitsky, said that in the garrison in the wasteland near the house number 40 on the 3rd Post Office will install on the pedestal MiG-29. It was planned that the area between the houses number 35 and 40 will go under construction. However, due to lack of funding, there has been a wasteland for a long time.

This year, at the expense of the city budget, works were carried out on the improvement of the area near house No. 40, works on paving slabs, installing benches, planting trees, and installing additional lighting were performed.

The place chosen is historical – during the war years, the airfield of the 16th Fighter Aviation Regiment was located here, which defended the sky of Moscow. The Central Research Institute of the Air Force of the Ministry of Defense of the Russian Federation was also founded here. Thousands of city residents worked within its walls for the benefit of Soviet and Russian aviation.

The MiG-29 is a fourth-generation Soviet multi-role fighter, developed in an experienced MiG design bureau.