Last year, General Atomics (GA-ASI) unveiled its Sparrowhawk air-launched and air-retrievable Small Unmanned Aircraft System (SUAS). Now General Atomics has given us the first look at how this drone is designed to be recovered in flight.

The company has also offered other details about the expected performance and capabilities of the Sparrowhawk, which is also intended to be air-launched from larger aircraft, including unmanned platforms, such as the MQ-9 Reaper.

Sparrowhawk is described by GA-ASI as a game-changing SUAS which an aircraft such as the MQ-9 Reaper can carry under its wings, as it might a traditional payload like a sensor pod or a fuel tank (it weighs just 500 lb), and which can be launched and then recovered in mid-flight when the “mothership” reaches an area of interest on a mission, something that few remotely operated aircraft have ever done until now.

“GA-ASI has developed one game-changing SUAS [small unmanned aircraft system] known as Sparrowhawk, which an aircraft such as the MQ-9 can carry under its wing as it might a traditional payload like a sensor pod or a fuel tank,” the company’s official news item says. “But when the MQ-9 reaches an area of interest on a mission, it can do something few remotely operated aircraft have ever done – launch the smaller UAS and then recover it in mid-flight.”

“The Sparrowhawk might surveil an area and turn back to rendezvous with the aircraft that launched it,” it continues. “In a safe area, well away from hostile warplanes or anti-air systems, the larger UAS can snatch the Sparrowhawk out of the sky and continue its mission.”

The official video includes a computed generated sequence showing how this recovery process is supposed to occur. The mothership aircraft, an MQ-9B Skyguardian is depicted in this case, deploys a relatively thin line with an orange-colored sphere at the end of it. The Sparrowhawk then approaches the line, “catching” it in the joint between the front of its left-wing and its body.

You can watch the full GA-ASI Sparrowhawk video presentation here.

Once Sparrowhawk is in position near the towline, a small flap on the left side of its fuselage opens to help the cable get near the aircraft as it maneuvers. Then, a second flap opens in front of the first one, blocking the towline in position as the orange mass is caught between the two flaps before both flaps close securing the line. The SUAS wings then return to their stowed position by rotating 90 degrees and the mothership starts retracting the towline to secure Sparrowhawk under the pylon.

The company had already anticipated last year that the expendable sUAS will enable EW/SIGINT (Electronic warfare/SIGnals INTelligence) and ISR (Intelligence, Surveillance, Reconnaissance) missions in a contested environment, thanks to its swappable 60-lb payload in the nose. Among the payload options, the company mentioned imaging radar, SIGINT/ELINT, jamming, and day/night imaging sensor packages.

Longshot features a stealthy design with a V-tail, straight wings, and internal weapons bays. No info was provided about the dimensions, however, the drone is represented armed with AIM-120 AMRAAM medium-range radar-guided missiles, and the weapons bays where they are carried occupy about half the length of the drone, so the total length could be around 7 or 8 meters, as the AMRAAM is 3.7 meters long. Also, no info was provided about the engine, which is not visible in the image.

DARPA’s LongShot program was announced earlier this year and has awarded contracts to General Atomics, Lockheed Martin, and Northrop Grumman for preliminary Phase I design work. Northrop Grumman also unveiled a concept art of the design that will be submitted for the program, showing a jet-powered drone with V-tail and sweptback or delta wings. 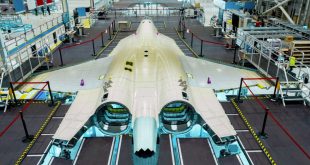 TF-X next-generation fighter in the final assembly line: Twitter In a video made public on …