During the typhoon detection test flight, the Wing Loong-10 drone took off from Bo’ao Airport in South China’s Hainan Province, dropped 30 sondes from an altitude of 10,000 meters, and conducted a multidimensional scan of Typhoon Sinlaku together with its millimeter-wave radar, as observation data on factors including temperature, humidity, atmospheric pressure, and hydrometeors was sent back to the ground in real-time, China Central Television (CCTV) reported on Tuesday.

The Wing Loong-10 is built by Chinese company Chengdu Aircraft Industrial (Group) Co Ltd and is under the state-owned Aviation Industry Corporation of China (AVIC). The drone is currently in use by China, various countries in the middle east, and Nigeria. Wing Loong-10 has a flight time of 20 hours and a maximum flight altitude of 16,000 feet. It has a maximum flight speed of 180 miles per hour and uses a specially designed turbojet engine. Other drones made by the company all use turboprop engines.

The Wing Loong-10 has been specially built for typhoon detections with its specially built jet engine. More tests are expected to take place over the coming months to ensure the drone is ready for real use and is likely to be sold to other countries if everything goes well.

The Cloud Shadow is a high-altitude high-speed multifunction drone installed with a high-end turbojet engine. It can conduct rapid and extensive intelligence gathering and long-distance precision land/sea attacks, AVIC said in a statement sent to the Global Times in 2017.

In addition to its striking resemblance to the Cloud Shadow, the Wing Loong-10 also seems to use a turbojet engine, while most other Wing Loong series drones use turboprop engines, a drone industry expert told the Global Times on Tuesday.

The Wing Loong series and the Cloud Shadow drones are all available on the international market.

This particular Wing Loong-10 built for typhoon detection purposes is likely still in its development phase, and more tests will also likely be conducted for its other functions, the expert said.

It is reported that typhoons cause China $4.22 billion in economic losses every year, making the government invest even more than before to ensure they are able to predict typhoons accurately and in time to prepare, in theory, to lower the amount of destruction. 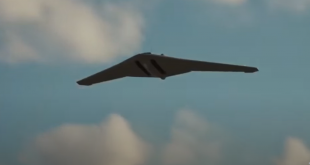 As we have reported earlier, Iran has released video footage and other details about a …