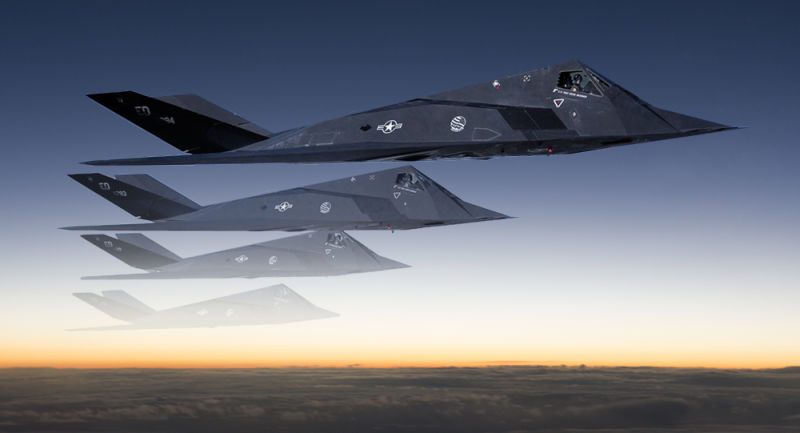 The U.S. Air Force officially retired its 52 surviving F-117 Nighthawk stealth fighters in 2008, transferring their radar-evading attack mission to B-2 bombers, F-22s and eventually F-35s. The Air Force claimed it would preserve the F-117s for future use

1) Americans have managed to devise a computer program called “Echo” which made it possible to create planar planes distributed so as to break down 99% of radar signals with which the plane was “hit”.

2) US Air Force denied the existence of the aircraft until 1988, when first photo is presented. In April 1990, two planes flew into the Nevada airport during the day, visible to tens of thousands of crowded shrines.

3) To reduce aircraft development costs, its electronics, fly-by-wire system and some other parts come from the F-16 Fighting Falcon, F/A-18 Hornet and F-15E Strike Eagle. Parts have been administrated as a spare parts to these aircraft to keep the F-117 secret.

4) There is no radar on the aircraft which further reduces its radiation and the lateral section.

5) In war operations, only one F-117 aircraft was lost. March 27, 1999, in the midst of NATO air strikes on the goals in SR Yugoslavia, 3rd battalion of the 250th Serbian Missile Brigade succeeded in defeating an F-117 with the S-125 Neva missile defense system. Because of the civilians who were near the plane crash, the US Air Force did not want to bomb the crash site. The Serbs later provided the remains of the aircraft to Russian engineers for study.

7) Flat, triangular cockpit glasses prevent radar reflection from cabin equipment. For example, reflection of a pilot’s helmet can be much larger than the overall reflection of stealth plane. The F-117 is limited to flying only at subsonic speeds, practically just horizontally.

8) The weapon is located (hidden) in the inner tank, radio and other antenna systems are pushed into the contour of the aircraft, and pulled out only in special cases.

10) The F-117 was made entirely of flat surfaces because 1970s era computers didn’t have enough power to calculate the radar cross-section of curved surfaces.

11) The F-117’s first flight took place in 1981 – the same year the Space Shuttle flew its first orbit around the earth.

12) F-117s were initially based and flown at the Tonopah Test Range, the same facility used to test fly acquired Soviet aircraft.

14) Because the F-117 was a secret project, F-117 pilots were assigned to fly the A-7 Corsair II for “avionics tests and evaluation of weapons systems”.

15) The Navy evaluated a version of the F-117 nicknamed the “Seahawk”, but determined it wasn’t well-suited for aircraft carriers. 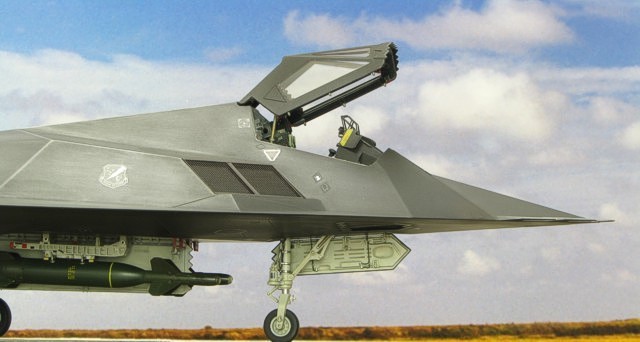 16) The F-117 holds the record for longest non-stop single-seat fighter flight, when it was flown from Holloman AFB in New Mexico to Kuwait, with aerial refueling.

17) One F-117 was lost to enemy fire. The jet was shot down over Yugoslavia in 1999. The pilot ejected and was rescued hours later.

The idea behind stealth aircraft was theorized by a Soviet mathematician, who in the 1960s found that the strength of a radar return wasn’t related to the object’s size, but instead related to the edge configuration of the object.

Here is a video of Interesting Facts about F-117 Nighthawk