Deputy Commander of the Iranian Air Force, Brigadier General Hamid Vahedi, that a decision had been made to develop a domestic heavyweight fighter aircraft, which if successful would mark the second indigenous Iranian fighter to enter serial production.

The aircraft would follow on from the success of the Kowsar lightweight fighter program, with the jet entering service in 2018 and today in serial production.

The Kowsar is closely derived from the American F-5E Tiger II third-generation lightweight platform, for which Iran was one of the largest export clients in the world, and is considered a fourth-generation aircraft by the Iranian Military due to its advanced avionics, sensors, and electronic warfare systems.

This has led to widespread speculation that Iran’s heavyweight fighter could be based on one of its more powerful American jets – either the F-4E Phantom or the F-14A Tomcat.

The F-14 is notably the only fighter in Iranian service today which would be classified as a heavyweight and is the heaviest fourth-generation aircraft in service anywhere in the world today which was designed for air to. air combat.

Iran’s defence sector has developed an advanced industrial base for servicing the F-14, and has made over 300 modifications to the design including replacing its radar, avionics and electronic warfare systems and equipping it with new longer ranged air to air missiles.

As the U.S. pushes for an arms embargo against the country, which would prevent it from acquiring heavyweight jets from abroad, developing such a jet domestically could be a much more cost-effective option. Iran notably developed advanced long-ranged air to air missiles to equip its F-14 fighters, the Fakour 90, which is its only class of modern missile of its kind in service.

It is highly possible that a new heavyweight fighter will be designed to carry the Fakour 90, although the sheer size of the munition means the heavy fighter would need to be from the same weight range as the F-14.

Although the F-14A is a relatively old fighter, an indigenous jet derived from it could be much more advanced and is likely to benefit from technical assistance from China and North Korea – which have bolstered Iran’s defence sector with many key technologies.

It is possible that Iran’s heavyweight fighter will be based on another one of its fighter classes, possibly even taking inspiration from its Soviet built MiG-29A platforms which are its newest foreign sourced aircraft in service, and that the Iranian definition for a ‘heavyweight’ jet will not correspond to the more general international definitions – but instead be classified relative to the very light weight of the Kowsar.

The MiG-29A, alongside the F-4E, is Iran’s only classes of a medium fighter with an air to air combat capability. Should Iran’s ‘heavyweight fighter’ turn out to be from the medium weight range, it would provide a lighter complement to actual heavyweight fighters acquired from abroad – with the country reported having shown considerable interest in acquiring either Su-30SM or Su-57 jets from Russia.

Iran is thought to also be considering acquiring medium or lightweight ‘4++ generation’ fighters from overseas – namely the Chinese J-10C or Russian MiG-35 which entered service in 2018 and 2019 respectively. It remains uncertain how these acquisition plans could fit in with the country’s ambitions for a more capable domestic fighter from a higher weight range. 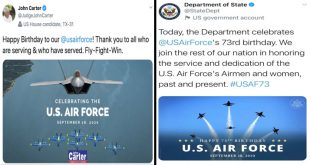 The State Department and U.S. officials made an embarrassing error today when it posted a …