Is the Royal Air Force Dying? RAF has the smallest combat force in history down to Just 119 Fighters 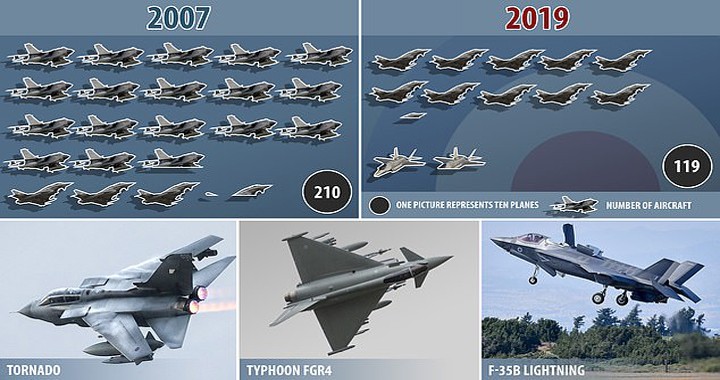 The Royal Air Force in mid-2019 operates just 119 fighters, the lowest number in its history.

The shrinking of the British fighter fleet has happened even faster than observers predicted just a few years ago. And it could be years before the force significantly grows again.

As of June 2019 the RAF has 102 Typhoons and 17  stealth fighters in seven front-line squadrons. The last squadron of 1980s-vintage Tornado fighter-bombers disbanded in February 2019.

It leaves the air force smaller than at any time since its creation during the First World War.

The RAF said number of aircraft does not equate to capability and it has the jets it needs to meet its commitments.

But military analysts have warned that whatever the sophisticated capabilities of the fourth- and fifth-generation planes of which the fleet is now comprised, ‘no aircraft, no matter how capable, can be in more than one place at any time’.

The numerical decline of the RAF to little more than double-figure fighter numbers is the latest chapter in a contraction which has been going on for decades. 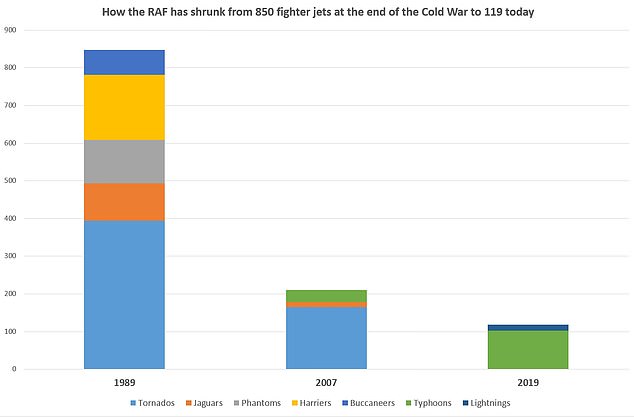 During the second world war close to 35,000 Spitfires and Hurricanes were produced in six years to help win the Battle of Britain and then reclaim the skies of occupied Europe.

In 1989, the final year of the Cold War, the RAF still had more than 850 fighters, interceptors, and fighter-bombers with the power to meet the might of the USSR and its Warsaw Pact allies should the worst happen.

The fleet was comprised of Tornados, Jaguars, Phantoms, and Buccaneers as well as more than 170 Harrier jump jets with the ability to take off and land vertically.

And as recently as April 2007 the RAF’s forward available fleet – planes available to fly which are not undergoing long-term maintenance or held in reserve – still comprised 210 fixed-wing fast attack jets.

The RAF’s workhorse, the Tornado, the last of which were retired earlier this year, made up more than 75 percent of the fleet.

By 2007 the RAF also had 32 of the fourth-generation Eurofighter Typhoon craft:  faster, more maneuverable, and more heavily armed that the Tornado.

But Tornado numbers declined each year between 2007 and 2019, according to the MOD, as planes in the aging fleet reached the end of their economically viable lifespan.

Twelve years on, the combat fleet no longer contains any Tornados, and is comprised mainly of the Typhoon FGR4, of which the RAF had 102 available in a recent snapshot. It is also expecting delivery of two additional squadrons later this year.

And 17 of the fifth-generation supersonic stealth fighters, the Lightning F-35B, are now in active service – although eight are in the USA undergoing ongoing trials and training.