Fighter jets from the Israeli Air Force landed in Germany for the first time ever ahead of a symbolic memorial event and joint military exercises between the two countries.

On Aug. 17, 2020, six Israeli Air Force F-16C/Ds “Barak”, belonging to the 101 and 105 Sqn from Hatzor Air Base arrived at Nörvenich Air Base, in western Germany, where they will remain for two weeks to take part in exercise Blue Wings 2020.

Interestingly, tomorrow, Aug. 18, “as part of the exercise” a formation led by a IAF G500 with two Israeli F-16s and two German Air Force Eurofighters will carry out a flyover of the Dachau concentration camp, in memory of the Holocaust victims, and will then fly over the “Fürstenfeldbruck” Airport close to Munich, in memory of the 11 Israeli Olympic delegation members that were murdered in the 1972 Olympics terrorist attack.

German pilots have twice traveled to Israel for joint maneuvers in recent years, but this is the first time the Israelis are taking part in such exercises on German soil and over German air space.

The historical significance was highlighted by Maj. Gen. Amikam Norkin, the Israeli Air Force’s commanding officer, who noted that for many of his fighters, past links to Germany were personal — and tragic.

“Many I.A.F. fighters are grandchildren of Holocaust survivors, and in the ’60s and ’70s of the last century, half of the I.A.F.’s pilots were Holocaust survivors themselves — and yet we believe this is the right thing to do,” he said at a ceremony last week.

General Gerhartz of the German air force thanked General Norkin “and all his pilots for their trust and emotional attachment.”

That trust is being called on at a delicate time for Germany’s military, with growing indications that far-right extremism has infested its ranks. Although all members take an oath in which they vow to support the democratic ideals enshrined in the country’s Constitution, officials last year counted 600 instances of extremism within the ranks, mostly from the far right and most of them in the army.

Last month, the German defense minister disbanded one of the companies in the most elite, highly trained unit of the country’s special forces over concerns that it had been infiltrated by far-right extremism.

The country is under pressure to modernize its armed forces as Europe contemplates stronger cooperation among its partners. The United States under President Trump has repeatedly battered Berlin for not meeting its NATO commitments to spend 2 percent of gross domestic product on the military.

Nearly a decade after the German military scrapped the draft in favor of a more professional force, its air force has struggled to maintain its flight readiness as it replaces Cold War-era Tornado fighter jets with newer planes — including the European-made Eurofighter plane, which the German pilots will use for the joint training.

Facing both equipment and personnel issues, the country’s military has in recent years even reportedly considered recruiting citizens of other European Union countries to make up for a shortage of skilled labor. 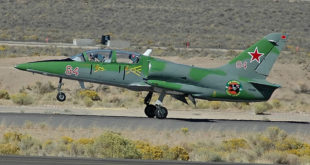