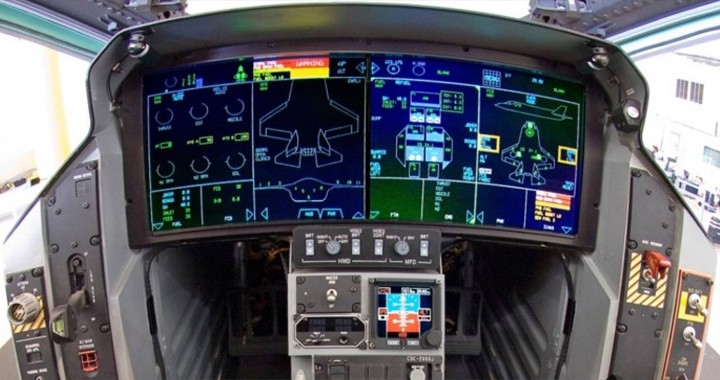 We spend hundreds of hours on board a variety of airplanes each year, most often en-route to a trade show or product launch event, but occasionally we have a rare opportunity to hop on board military aircraft, to test out unrelated products, or, even more unusually, to take a seat behind the yoke. Sadly that’s not what we’re doing today — well, not exactly.

We are taking a closer look at the F-35 fighter jet at Lockheed Martin’s Fighter Demonstration Center just outside our nation’s capital, but, being in the middle of a corporate complex, there’s no actual Lightning II on hand.

We were able to take a simulated ride, however — this isn’t your ordinary 4D sickness-inducing amusement park thrill. The F-35 is by far the most advanced Lockheed jet to date, with updated radar, all-internal weapons, improved tracking systems, 360-degree infrared coverage with a visor readout, and a full-stealth design, not to mention the incredibly capable glass cockpit powered by more than 9.3 million lines of software code, and an overall smoother experience for pilots that could end up spending shifts of 12 hours or longer in flight.

The F-35 has already seen plenty of field time in the US, with more than 500 flights already in 2012, and it’s set to make its way to the UK armed forces next week and the Netherlands later this year, but while the aircraft is quite familiar to the pilots tasked with flying it, the public hasn’t had an opportunity to experience Lockheed’s latest airborne warrior

We flew a simulated mission within a grounded duplicate of the flyable F-35 cockpit, and the capabilities and improvements are quite clear — you definitely don’t want to encounter an F-35 from a previous-generation aircraft.

The dual 8 x 10-inch touch-enabled displays combine to give you 8 x 20 inches of real estate, with dedicated modules for the weapons systems, targeting, and navigation easily accessible — you can also move them to different panels depending on your current objective.

A pair of joysticks at the left and right side provide direct access, letting you move a cursor to track enemy crafts or ground-based targets as well, and a very slick heads-up-display mounted in the helmet provides infrared mapping and instrument readouts.

Overall, it seems to be an incredibly powerful system. Unfortunately, the mock-up on display here isn’t accessible to the public, but you can join us for a behind-the-scenes look just after the break.

On 31 July 2015, the United States Marines declared ready for deployment the first squadron of F-35B fighters after intensive testing.