An interesting photo of what could be either the classified Northrup Grumman RQ-180 drone or the Lockheed Martin P-175 Polecat drone, surfaced briefly on Instagram late Sunday, November 1, 2020, then disappeared.

Before Kolinsky could remove the image, it was screen captured and has been reposted on several internet groups, where most comments seem to support the idea that this may be the enigmatic RQ-180 or the P-175 Polecat.

Soon after the photo appeared, then disappeared to become more or less viral, Aviation Week reporters Steve Trimble and Guy Norris wrote that, “A picture has surfaced showing a new aircraft generally matching Aviation Week’s understanding of the shape of what is commonly known as the RQ-180 unmanned aircraft system”:

The photo, which was claimed to be taken, “…in California just north of Edwards [AFB]”, shows an aircraft trailing two prominent contrails, suggesting the altitude of the aircraft at the time the photo was taken was in excess of approximately 25,000 ft.

The U.S. Air Force does not acknowledge the existence of the RQ-180 drone, but a number of factors seem to support theories of its existence and even operational deployment.

One theory that supports the operational deployment of the RQ-180 is the reduction in the number of RQ-4 Global Hawk reconnaissance drones. It’s possible a newer, more capable RQ-180 may have taken over missions previously assigned to RQ-4s.

Previous U.S. Air Force Selects BAE Systems As A Vendors For Skyborg program
Next Second Batch Of Rafale Reaches India Flying Non-Stop From France In A Ferry That Lasted For Over 8 Hours 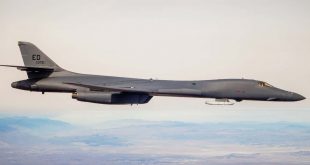