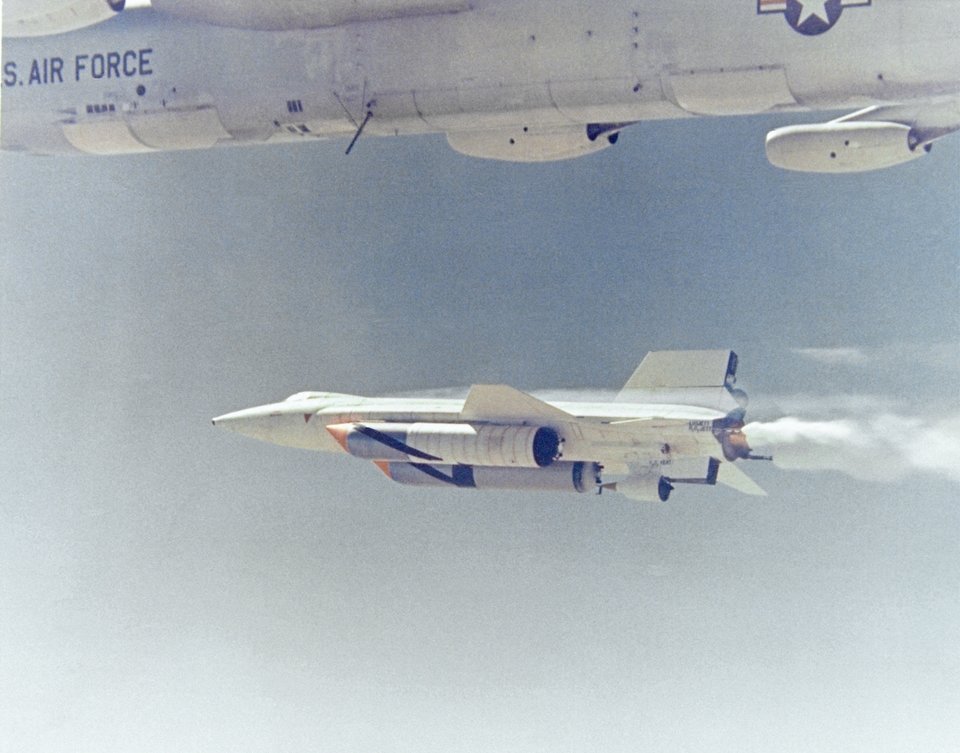 The North American X-15 was a hypersonic rocket-powered aircraft operated by the United States Air Force and the National Aeronautics and Space Administration as part of the X-plane series of experimental aircraft.

The Air Force pilots qualified for military astronaut wings immediately, while the civilian pilots were eventually awarded NASA astronaut wings in 2005, 35 years after the last X-15 flight. Forrest S. Petersen, the only Navy pilot in the X-15 program, never took the aircraft above the requisite altitude and thus never earned astronaut wings.

The craft had to be drop-launched from the wing of a specially modified B-52 Stratofortress but could reach the very edge of space, setting altitude records for winged aircraft.

Once dropped from the wing of the “mother ship” the X-15 launched its XLR-99 rocket engine to propel the craft at hypersonic speeds. It was a unique plane because it was designed to operate in an environment where there was less air than other aircraft.

It was the world’s first space plane, thus it used rocket thrusters to control its altitude at times. It could switch back and forth between conventional flight controls as needed for exoatmospheric flight as well as landing the craft.

A second one was lost in 1967, just minutes after its launch. The craft had taken a video of the horizon at the edge of space and began its descent to the world below. As the craft descended, it entered a hypersonic spin. Even though its pilot, Michael J. Adams, was able to recover the plane at 36,000 feet, it then went into an inverted dive at Mach 4.7. The plane broke up under the stress and Adams was killed.

Pilots who flew the X-15 to its highest altitudes were eventually given astronaut wings by the US Air Force, considering the craft broke the USAF threshold for the edge of space at 50 miles above the surface of the earth. The craft would also make faster and faster hypersonic flights until October 3, 1967, when William J. “Pete” Knight took the craft to its maximum speed of 4,520 miles per hour.

Aside from these two achievements, the X-15 also had a number of notable firsts, including being the first restartable, throttle-controlled and man-rated rocket engine. It also tested the first spaceflight stellar navigation system and advanced pressure suits. The X-15 program was a direct ancestor of the modern Space Shuttle program, and without it, many notable achievements would not have happened.