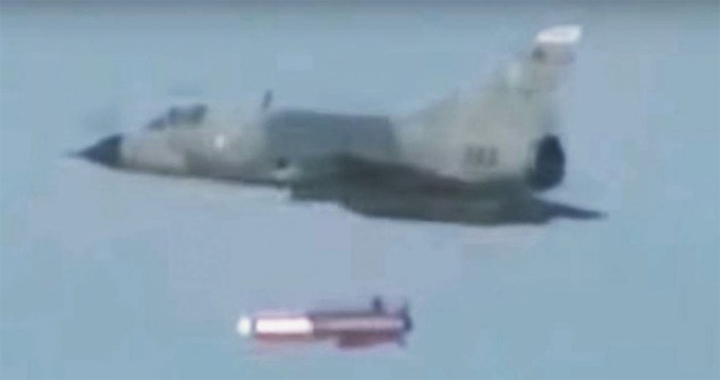 On 18 February, Pakistan announced that it has test-launched a new variant of its Ra’ad II nuclear-capable, air-launched cruise missile (ALCM) with a range of 600 km.

In a statement, Inter-Services Public Relations (ISPR), the media wing of the Pakistani military, said that the 600 km range of the new missile “significantly enhances” the PAF’s “air-delivered strategic stand-off capability on land and at sea”.

The new missile variant, which was shown in a low-resolution video being launched from a Pakistan Air Force (PAF) Mirage III fighter aircraft, “is equipped with state-of-the-art guidance and navigation systems ensuring engagement of targets with high precision”, said the ISPR, referring to the weapon system as “a major step towards complementing Pakistan’s deterrence capability”.

No further details were provided about the latest Ra’ad II variant, which has been fitted with what appears to be a more conventional tail fin configuration compared to the ‘twin-tail’ configuration seen in previous variants.

Ra’ad-II, with a range of 600 Km, which significantly enhances air delivered strategic standoff capability on land and at sea. The weapon system is equipped with state of the art guidance and navigation systems ensuring engagement of targets with high precision. https://t.co/GXVd3mpmrq pic.twitter.com/xwYnQgGQga

He appreciated the technical prowess of the Pakistani scientists and engineers who developed the weapon system and made the launch a success, the statement said.

Pakistan’s development of the Ra’ad could be seen as an attempt to match India’s BrahMos cruise missile, according to the US-based Missile Defense Advocacy Alliance, a non-profit organization.

It also said that currently this missile is planned to be attached to Mirage aircraft or F-16 fighter jets of the Pakistan Air Force.

Last month, the ISPR said Pakistan conducted a successful training launch of surface-to-surface ballistic missile Ghaznavi, capable of delivering multiple types of warheads up to a range of 290 km.