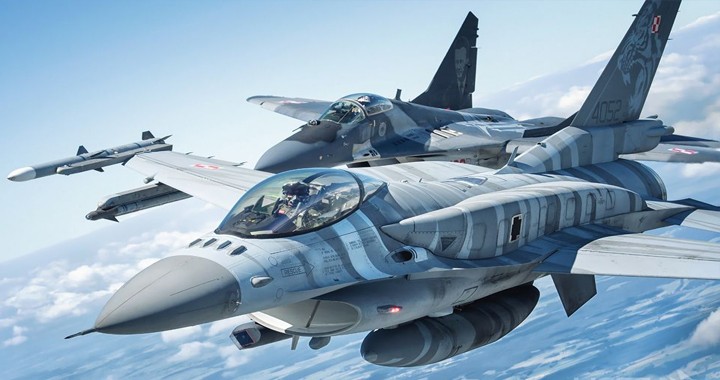 In the first video, let have a look at Dogfight took place During the 85th Anniversary of Polish Air Force Academy in Dęblin.

This above clip is from the same event too

The first mock air combats took place when 510th Fighter Squadron (FS) “Buzzards” belonging to the 31st Fighter Wing (FW) from Aviano Air Base in northern Italy, flew against Luftwaffe Jagdgeschwader 73 (JG 73) MiG-29s in May 1995 during a German Fulcrum deployment to Decimomannu Air Base, on the southern tip of Sardinia

“In a low-speed fight, fighting the Fulcrum is similar to fighting an F-18 Hornet, but the Fulcrum has a thrust advantage over the Hornet.

An F-18 can really crank its nose around if you get into a slow-speed fight, but it has to lose altitude to regain the energy, which allows us to get on top of them.

The MiG has about the same nose authority at slow speeds, but it can regain energy much faster.

“Some of their capabilities were more wicked than we originally thought, we had to respect the helmet-mounted sight, which made our decisions to anchor more difficult.

Below 200 knots, the MiG-29 has incredible nose-pointing capability down to below 100 knots.

The F-16, however, enjoys an advantage in the 200 knot-plus regime.

At higher speeds, we can power above them to go to the vertical. And our turn rate is significantly better.

By being patient and by keeping airspeed up around 325 knots, an F-16 can bring the MiG-29 to its nose. But the pilot must still be careful of the across-the-circle shot with that helmet-mounted display.”

Limitations of the MiG-29

“Their visibility is not that good, their disadvantage is a real advantage for us. F-16 pilots sit high in the cockpit.

All the MiG-29 pilots who sat in our cockpit wanted to look around with the canopy closed.

They were impressed that they could turn around and look at the tail and even see the engine can.

Besides visibility, I expected better turning performance, the MiG-29 is not a continuous nine-g machine like the F-16.”

such as the inability of the fighter to fly supersonic with the tank attached, an operational scenario that also limited the MiG-29 to four g’s when the tank had fuel remaining.