Read Part one: Carrier borne F-22: A superweapon that America should have built Part 1

US Navy will soon confront an operational environment where any nation equipped with modern long range aircraft such as the Su-27/30/35 Flanker will be able to challenge a Carrier Strike Group with a saturation supersonic cruise missile attack. Neither the F/A-18E/F Super Hornet nor the F-35C Joint Strike Fighter will have the performance or stealth to deal with this kind of threat.

Even with reduced radar signatures, the F/A-18E/F has a residual signature that allows the Su-35BM to launch a PL-12, or R-77M, or ramjet RVV-AE-PD at the kinematic limits of these missiles’ engagement envelopes – and with the Flanker higher and faster than the Super Hornet, well outside its AIM-120C/D range envelope.  So the Flanker gets ‘free shots’ – and can carry lots of them.  The F/A-18E/F has some fine defensive electronic countermeasures and the ALE-55 will seduce many of the incoming missiles – but not all.  The R-77M ‘Adder’ will have alternate active radar, heat-seeking and passive anti-radar homing seeker heads, so any competent OCA force would deliver a mix of these missiles in a mass firing.  This is a ‘damned if you do, damned if you don’t’ situation for the Navy Hornets – the radar and electronic countermeasures are required to prosecute an attack on the Flankers but will attract passive anti-radar homing missiles.  The missiles with heat-seeking guidance also present a serious threat as their homing is not affected by the towed decoy.  Expect the exchange ratio to be about 4:1 in favor of the Flanker E+.

The F-35 B/Cs might fare a bit better, but their Achilles’ heel is a shortage of missile shots.  A Flanker E+ can carry up to 10 long-range missiles and 2 short-range missiles, but not to a distance of 1,000 nm.  At 500 nm or so, they can carry 8 long-range missiles and can fire them all in a track-while-scan’ mode.  The JSF’s reduced signature forces engagements where both aircraft are within range of the other’s missiles.  However, the Flanker E+ has more missile shots than the JSF; has modern DRFM Electronic Counter Measures; and, possibly, a towed decoy where the F-35 has none. Long range heat-seeking missiles pose the same danger to the JSF as to the Hornet. Expect an exchange rate of at best about 1:1 between the Flanker E+ and the JSF.

Both the Hornet and JSF lack the aerodynamic agility to out-turn missiles.  They also lack the speed essential to a safe disengagement from a fight.  Here is another thorny dilemma in modern naval air warfare.  If the US Navy defensive fighters stay close enough to the fleet to be covered by the CG/DDGs’ Surface to Air Missiles on egress, they have allowed the enemy to get within launch range of their anti-shipping missiles; if they don’t, they will be cut down during the egress to the carrier.

The argument which comes next is predictable – deploy an air combat aircraft that can effectively ‘kill the archer’ and survive. This aircraft is a ‘navalized’ F-22A – let us call it the ‘F/A-22N Sea Raptor’. This is not the same as the canceled Naval Advanced Tactical Fighter (NATF). The US Navy wanted an advanced fighter, but the NATF failed because the Navy wanted a de-facto new-technology F-14 engineered from F-22 components. This suggestion is the converse; convert the F-22A into an F-14 replacement – a much lower risk and less costly approach. The fiscal and timeline costs of restarting the early 1990s F-22 derived ‘swing wing’ NATF are simply out of feasible bounds. 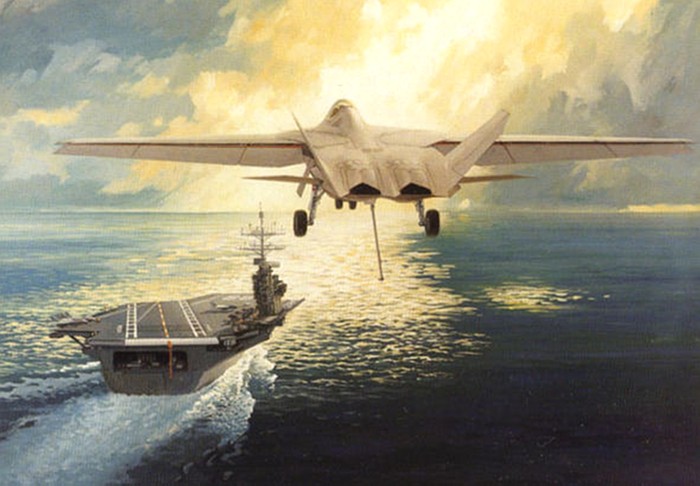 How about the approach and trap speeds, critical for carrier operations? About 125 KIAS at 50,000 lbs gross weight would be useful – the F-35C approach speed is ~145 KIAS.

There are several ways of reducing the F/A-22N’s approach and landing speed (Refer Annex), including using the Raptor’s thrust vectoring capability (TVC) though this will require a means of providing a balancing pitching moment in the Powered Approach (PA) configuration.

One way this can be achieved is by replacing the existing hinged nose-wheel doors with scissoring lifting canards. Drop the gear and the lifting canards deploy with a fixed positive angle of attack, providing lift and moving the center-of-pressure forward. The elevators, in turn, respond with less ‘download’. This configuration has been modeled and flown using a basic simulator as a comparator, with an F-22A configured with such lifting canards allowing nicely controlled approaches at 135 KIAS and traps at 125 KIAS. These speeds are similar to the F-14, which has a similar gross weight on recovery, results in similar momentum to be absorbed by the arrestor cable motors.

The canards would also assist in catapult launches, so with the F/A-22N at its maximum takeoff weight of about 80,000 lbs, it should be within the capacity of installed catapults. For comparison, the F-14 MTOW is around 75,000 lbs, but it has much less engine thrust available compared to the F/A-22N. 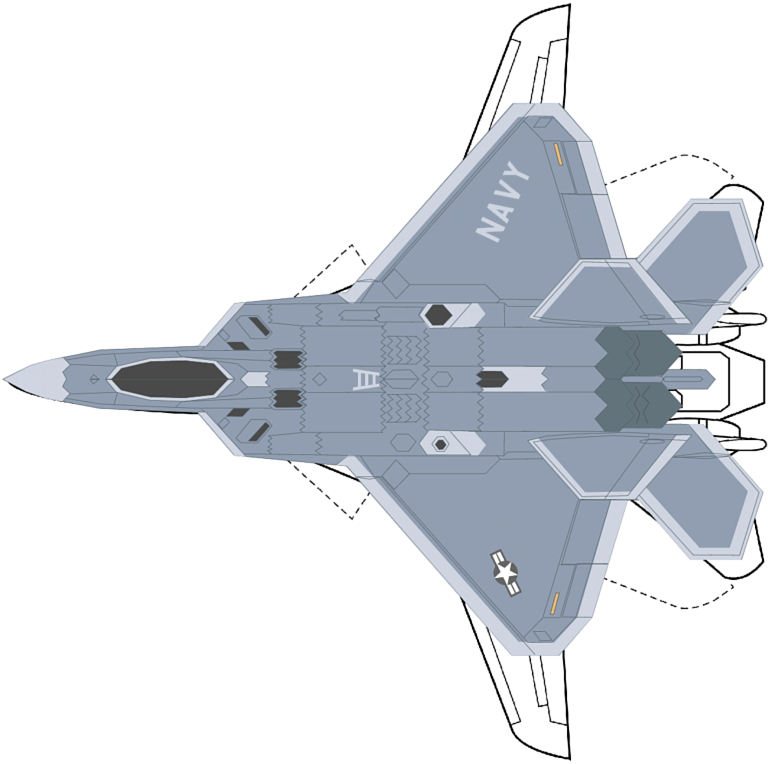 It may be necessary to ‘beef-up’ the airframe in some places, but the basic supersonic 9G rated structure is already there. Specific design changes might include a carrier qualified 24 ft/sec sink rate undercarriage, ‘beefing up’ the support and load transfer structure for the stronger undercarriage, a navalised nose gear with catapult launch bar, and a carrier rated arrestor hook for recoveries.

The USAF boom refueling could be retained, and the F-35B/C aerial refueling probe added to the forward fuselage. So configured, the F/A-22N would be able to take on fuel wherever it finds a friendly tanker.

The avionic and systems build would be based on the Air Force Block 40 plus configuration, so an F/A-22N Sea Raptor would have the Block 40’s full range of networking, air-to-air and air-to-ground strike capabilities. Additional Navy datalinks and ACLS would be required.

The cost of F/A-22N Sea Raptor

Pricing the Research and Development & Test and Evaluation, Production Engineering & Tooling (the NRE Costs) for the lifting canard, folding wings, undercarriage redesign, airframe strengthening and marinizing comes in at a rough-order-of-magnitude (ROM) cost of around $230M (-10%/+30% variance). This figure includes an appropriate margin for risk.

Over a production run of some 500 aircraft, the overall program cost, as distinct from the price charged, including amortization of the NRE, would add somewhat less than $10 million to the current F-22A production cost of $142 million . . .and that is assuming “all new” for any affected existing parts. However, the bulk of any affected parts will likely be able to be modified/upgraded, thus becoming cost-effective ‘cousin parts’ like those extolled in the JSF Program for the savings they will generate.

This is what one would call a classic capability bargain with superior cost benefit for all. You take an already outstanding aircraft and make it even more effective with an investment that is a tiny fraction of the cost of developing a whole new aircraft type or, for that matter, the money that still needs to be spent on trying to get the F-35B/C to meet its already surpassed specification.

More savings come from the volume production. Current cost estimate across the planned 91 x F-35B aircraft is ~ $158M a copy. For the current production F-22A, this figure is $142M a copy. A production run of over 700 Raptors will reduce this latter unit price substantially, so the USAF, USN and the USMC are all winners if the Sea Raptor numbers increase.

The ugly reality is that the US Navy is staring down the barrel of a global environment where its underperforming Hornets and Super Hornets, and planned to underperform F-35B/C Joint Strike Fighters are neither viable as penetrating strike assets or actually capable of keeping the fleet alive in the face of modern Russian designed supersonic sea-skimming weapons, which have proliferated on a global scale.

The F/A-22N Sea Raptor renders the F-35C CV completely redundant, as it will provide around three times the capability of the F-35C at similar unit procurement costs, with a twin-engine airframe better suited to naval operations. This would permit cancellation of the F-35C, never a favorite with professional naval aviators.

The funding reserved for around 400 F-35Cs would buy a similar number of F/A-22Ns.

Purchasing an aircraft with the ability to engage and defeat aircraft possessing the air combat capabilities of the Su-35BM Flanker E+ is a critical strategic decision for the United States. If it chooses aircraft inferior to those of potential adversaries, then not only will its Air Force risk annihilation in battle, but also the mighty power of its Naval Carrier Strike Groups is likely to be terminated in the second decade of this century. Without the navalized F/A-22N Sea Raptor, the US Navy will find itself out of the business of blue and brown water sea control, relegated to Third World counter-insurgency support roles.

The F/A-22N ‘Sea Raptor’ is the only remaining choice. 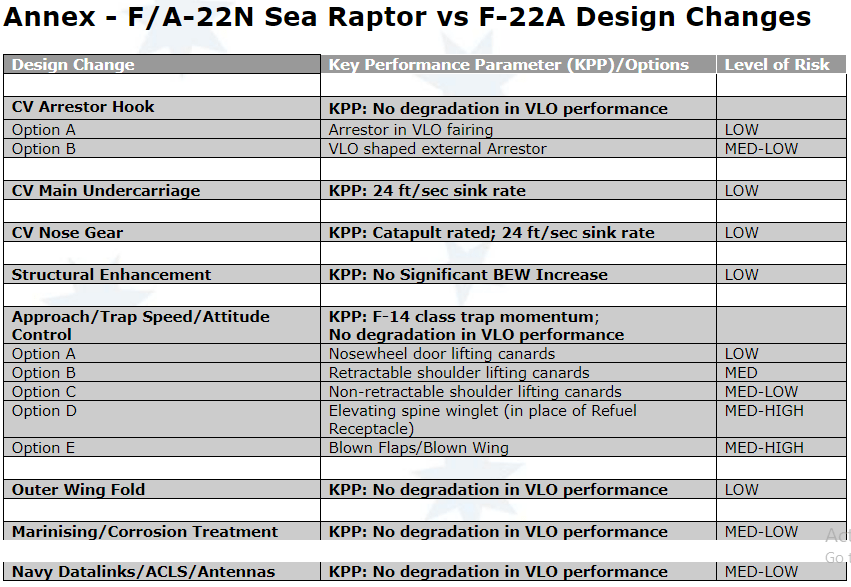 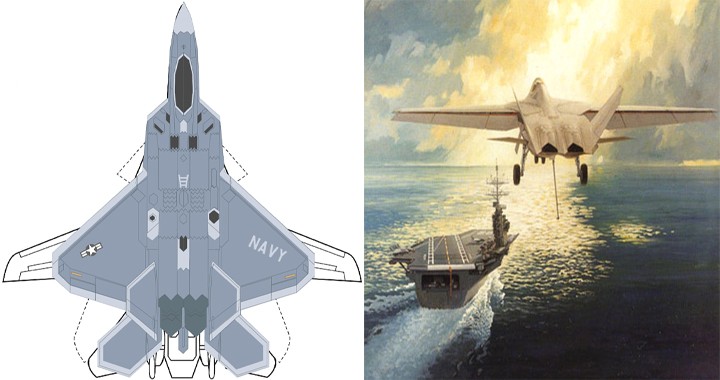 Previous Carrier borne F-22: A super weapon that America should have built Part 1
Next Slovakia picks F-16 over Gripen to replace ageing MiG-29s