It is not fully clear what weapon brought the aircraft down, but some reports state that it was a man-portable air defense system (MANPADS), otherwise known as a shoulder-fired heat-seeking missile.

Images and video are already coming out of Syria, with one image showing what appears to be a Su-25 with an engine on fire, and a video clearly showing the wreckage of a Russian Frogfoot.

The aircraft was totally destroyed and reports say that the pilot ejected, although his current status is unknown at the time of publishing.

The missile damaged the engine forcing the pilot to eject. The Su-25 has served as the backbone of Russia’s air campaign over Syria, with roughly half a dozen or more of the type usually taking up residence at Russia’s air base located south of Latakia, Syria.

The shoot-down comes two months after President Vladimir Putin declared major combat operations over during a surprise visit to Syria. It also comes following a series of complex attacks on Russia’s Syrian air base, one of which was deadly. As such, it seems as if Syria is becoming more dangerous for Russian troops, not less.
MANPADS have been present in Syrian, but not plentiful by any regard.

There has been talk of foreign powers possibly inserting the sensitive weapons into the Syrian conflict to help level the playing field against Syrian air power, but this hasn’t come to pass.

That being said, there has been an uptick in reports of high-end MANPADS being spotted on the Syrian battlefield as of late, along with some supporting video. Still, we cannot confirm one of these missiles brought the Russian jet down.

The pilot was Ukrainian, who had switched sides to Russia during Crimean Crisis. He may have thrown a grenade and used his pistol as Islamists stormed his position. Russia claims rebels used US manpad, Us denies.

However, it is interesting that the group that claims the shoot down has received US anti-air guns in the past. 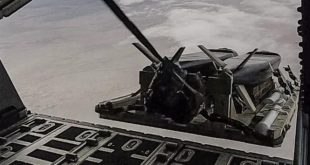