The scramble involved Russian Naval Aviation Su-27s assigned to the Baltic Fleet. According to the report, along with the B-52Hs, another unidentified foreign reconnaissance aircraft was also intercepted.

“On June 15, 2020, the quick reaction alert air defense forces of the Western Military District timely uncovered the operations of US Air Force B-52H bombers and reconnaissance aircraft of foreign states over the neutral waters of the Baltic Sea, following which they were shadowed by Russian fighters,” the ministry said in a statement.

The Russian MOD later released a video of the intercept that shows, along with the B-52H, also a German Navy P-3C Orion and a RAF Sentinel R1 ISR (Intelligence Surveillance Reconnaissance) aircraft (most probably ZJ691 that was tracked in the area).

The bombers involved in this mission was from the USAF’s 5th Bomb Wing based at Minot Air Force Base, North Dakota.

NATO’s ongoing BALTOSPS 2020 naval exercise involves 17 member states and two partner countries. A total of 28 warships and 28 aircraft and helicopters and around 3,000 personnel are taking part in the drills. 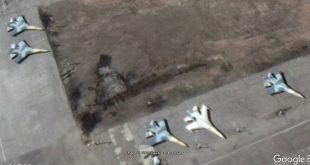