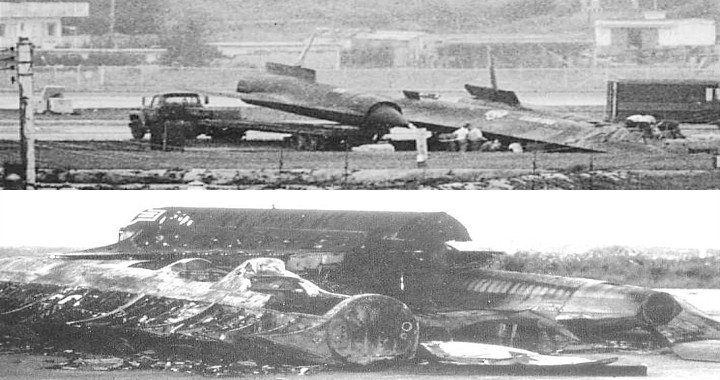 On 20 July 1972, an SR-71A ( 61-7978 ) Nicknamed the “Rapid Rabbit” piloted by Captain Dennis K. Bush and  Reconnaissance Systems Operator (RSO), Captain James W. Fagg was written off during the rollout phase of its landing.

In extreme crosswinds, the pilot a landing at Kadena AFB deploying the drag chute to combat the crosswind situation and slow the plane.

The braking parachute failed to slow the aircraft, forcing the pilot to turn the landing attempt into a touch-and-go and try for a second go-round.  He released the chute, took off, and attempted another landing.

On the second landing attempt, the aircraft touched down slightly “hot” but he had no chute to reduce the aircraft’s speed. The pilot was unable to keep the plane on the runway due to the crosswinds. The landing gear hit a concrete barrier. The aircraft suffered significant damage but the pilot and the RSO escaped without injury, but 978 was a total loss.

It has been said that #978 was buried there at Kadena, under a berm at the end of the runway, which is called “Habu Mountain” or “Habu Hill”. However, some parts including the rudders were used on other Blackbirds.

Kadena’s parallel runways divided the base. My outfit, Military Airlift Command, was on one side.

The other side was used by Tactical Air Command and Strategic Air Command. MAC “turned”—refueled and, if needed, repaired—the C-141s and C-5s that were hauling supplies into and out of the Vietnam theatre.

On the other side of the runways, SAC launched tankers in support of the B-52s en route from Guam to Vietnam.

An SR-71 Blackbird was stationed at Kadena AFB to make sure the airspace around it is secure. The spyplanes were housed in four hangars in the SAC area and never parked outside for the rest of the world to see. 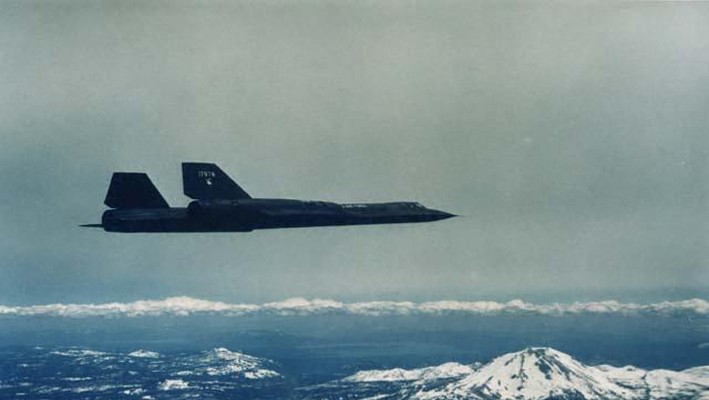 To launch, the SR-71 would start its engines inside the hangar and, flanked by an entourage of trucks, creep its way to the end of the runway. After final prep and checks at the runway’s threshold, the trucks would back off. Then this quiet, purring monster would let out a roar that seemed to drown out the world, then shoot down the runway as if it were fired from a gun. Lifting its nose to a 45-degree angle, it would disappear from view in less than 10 seconds. I witnessed dozens of launches, every one of them as spellbinding as the first.

An SR-71 coming into land was another show entirely. Upon touchdown, the nose would stay pointed in the air for a long time. Eventually, a giant orange drag chute would emerge and, at least 25 yards behind the airplane, fill out with dreamlike languor. Only then would the nose gear descend gently to the surface.

On the afternoon of July 20, 1972, I was in my maintenance truck, eavesdropping on the tower frequency. Word had gotten around that an SR-71 would be landing soon. Normally the Blackbird pilots weren’t a chatty bunch, but I could hear the anxiety in the voice of this one.

I heard the tower warn him of a 90-degrees-to-the-runway crosswind of 35 knots gusting to 50 knots—a typhoon was on its way. I could’ve sworn I heard the tower advise him to consider an alternate airport. But landing anywhere else was out of the question. The SR-71 wouldn’t have had the fuel, and everyone understood without discussion that the brass wanted that airplane on the ground and out of sight as quickly as possible.

I sought out a good vantage point to observe the landing: a small concrete building, which housed fuel pumps, about 50 yards from the runway the SR-71 was headed for. I climbed to the roof and settled in. I could see the landing lights before I could make out the airplane, perfectly lined up with the runway, three or four miles out. I couldn’t have been more focused if I were landing the damn thing myself.

The main landing gear touched down, and despite the hellish crosswinds, the fuselage was aligned perfectly with the runway’s centerline. It looked like the pilot was going to pull off a picture-perfect landing. But as soon as he deployed his drag chute, a wind gust blew it to port. I watched the nose shift to starboard.

Then one of the left main landing gear tires exploded.

The pilot jettisoned the chute, poured the coals to the burner, and rotated away from the runway, climbing back into the sky to circle around.

I remember thinking, What the hell is he gonna do now? No drag chute. Blown tire. And a monster crosswind, increasing by the minute. Fortunately, an incoming or outgoing SR-71 had the entire base to itself.

The pilot made a second approach, dumping fuel the entire length of the runway, then came back around for his final.

As he touched down, a fireball engulfed the left landing gear. The airplane kept rolling, nose still high in the air, and then the right gear tires blew. The Blackbird skidded past me like that, nose up and tires on fire, for four or five seconds. When the left gear collapsed and the wing struck the runway, the left engine exploded and debris flew high into the air. The entire airframe began to spin, still travelling down the runway at probably 150 mph, and finally, the right gear buckled.

The flaming wreck continued sliding down the runway, still on the centerline, until it finally drifted off to the left, into the grass. It came to rest about two-thirds of the way down the runway, about 4,000 feet from where I stood watching, jaw agape.

I watched the pilot and reconnaissance system operator in their bright orange flight suits leap from the remnants of their aircraft and run from it as fast as they could. I jumped down from the building and several of us started running toward them, but a fire truck and a base security car cut us off. The officer in the car ordered us to stay back. (The pilot, Captain Dennis K. Bush, and the reconnaissance systems officer, Captain James W. Fagg, escaped without injury.)

Five hours later, the typhoon was upon us. Nothing moved at Kadena for three days. Once the weather returned to normal, a recovery crew began trying to lift the top-secret wreckage onto the back of a flatbed truck with a giant crane. The earth was so saturated that instead of the airplane coming up, the crane sank into the mud.

About a month later, I saw the fuselage being loaded into a C-5 headed Stateside.

Forty-three years later, I still don’t understand why getting that SR-71 inside while a typhoon was bearing down on us was so important. But those decisions were made far above my rank.