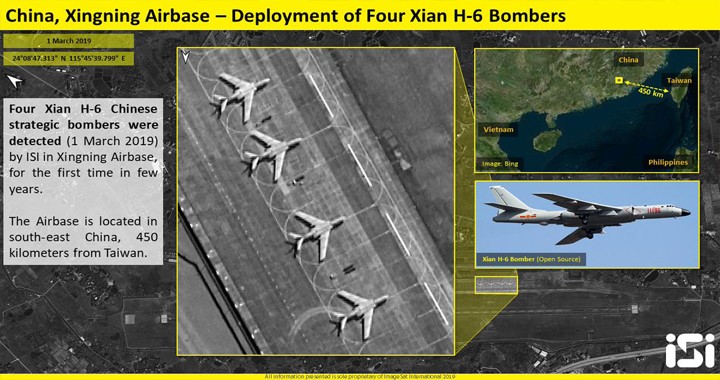 Xingning Air Base is a military airfield 5 km west of Xingning. 280 miles from Taiwan coasts

The official Twitter account of ImageSat alleged that “The bombers are deployed 450 km (280 miles) from Taiwan coasts.”

According to the current information, Chinese H-6K designed for long-range attacks and stand-off attacks. It is considered as a strategic bomber. The H-6 could carry bomb loads ranging between six thousand and eighteen thousand pounds with a combat radius of 1,100 miles. Additionally, the modernized bomber has a combat radius of roughly 2,200 miles.

Sources familiar with the matter said China’s PLAAF utilizes the H-6K primarily as a missile carrier, with the type able to carry up to six missiles such as the CJ-10 cruise missile or YJ-12 supersonic anti-ship missiles on underwing hardpoints.

China is also reportedly developing a new sub-variant of the H-6K, with a provision for air-to-air refueling.

Taiwan–China relations, are complex and controversial due to the dispute on the political status of Taiwan after the administration of Taiwan was transferred from Japan at the end of World War II in 1945 and the subsequent split of China into the above two in 1949 as a result of civil war, and hinges on the key questions of whether the two entities are two separate countries (either as “Taiwan” and “China” or Two Chinas: “Republic of China” and “People’s Republic of China”), or two “parts” or “regions” of the same country (i.e. “One China”), and also whether the transfer of Taiwan to the Republic of China was legal in the first place.

The think-tank specialist wrote his analysis and recommendations in a memorandum for the Council of Foreign Relations titled “Averting a Cross-Strait Crisis.”

Since then, the relations between the governments in Beijing and Taipei have been characterized by limited contact, tensions, and instability, due to the fact that the Civil War merely stopped without formal signing of any peace treaty and the two sides are technically still in a state of war.