on May 16, 2019, Russian President Vladimir Putin flew to the country’s southwestern region on board his IL-96-300PU presidential plane with an escort of six Su-57s. Putin arrived in the Russian town of Akhtubinsk for inspection of new weapons systems and aircraft. see details: Six Sukhoi Su-57 Fighter Jets escorted Putin’s Plane To Military Test Facility

The satellite image of the flight line at the test centre subsequently appeared on social media, showing the unmanned combat air vehicle (UCAV) next to an Su-57 and other aircraft, including an Su-34, a MiG-29, and multiple Sukhoi Flanker variants.

Satellite imagery has confirmed that Russia’s S-70 Okhotnik-B, or Hunter-B, unmanned combat air vehicle is very large, with a wingspan greater than that of an Su-34 Fullback combat jet.

From the satellite imagery, seen at the top of this story and below, it is safe to say that the Okhotnik-B has a wingspan of more than 50 feet and a length of around between 34 and 36 feet. This certainly would put it in the same general size class as the X-47B.

The new imagery does seem to show that the drone has a new paint scheme, which might indicate that it is a more refined design or a second prototype, but official Kremlin statements did confirm that the Russian President got a chance to see the Okhotnik-B.

The Sukhoi Okhotnik or Sukhoi S-70 “Okhotnik” is a Russian stealth heavy unmanned combat aerial vehicle (UCAV) being developed by Sukhoi as a sixth-generation aircraft project. The drone is based on the earlier Mikoyan Skat, designed by MiG, and encompassing some technologies of the fifth-generation Sukhoi Su-57 fighter jet.

The Sukhoi Su-57 is the designation for a stealth, single-seat, twin-engine multirole fifth-generation jet fighter being developed for air superiority and attack operations 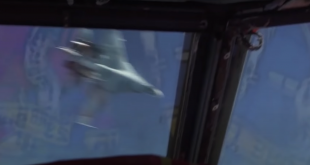