Serbian President Aleksandar Vucic touted the delivery of six Chinese-built CH-92A combat drones (UCAVs) for service with the Serbian military in a ceremony at a military airfield at Batajnica.

Serbia’s acquisition of the CASC CH-92 makes it the first European state to deploy Chinese combat drones, reflecting Belgrade’s deepening relationship with Beijing and its plans to domestically manufacture its own armed drones.

The drones are expected to become some of the most advanced weapons in the Serbian arsenal, as the cost-efficient unmanned aircraft can conduct tactical reconnaissance, precision targeting, ground attack and patrol missions, experts said.

A total of nine CH-92A drones plus 18 FT-8C air-to-ground missiles were included in the delivery. Fifteen more drones are expected in future procurements, reports said.

Developed by the state-owned China Aerospace Science and Technology Corporation (CASC), the CH-92A drone has a combat radius of more than 250 kilometers, a ceiling of 5,000 meters, and a maximum speed of 200 kilometers an hour, and it can carry two missiles, including the FT-8C air-to-ground missile that can reach targets 9 kilometers away, according to publicly available information.

Beijing-based military expert Wei Dongxu told the Global Times on Monday that the CH-92A is the best option for Serbia because of its high cost-efficiency. At a relatively low price, this type of medium-sized drone can offer precise tactical reconnaissance, hit ground targets including high-value targets and bunkers, guide artillery fire, and conduct patrol missions in sensitive areas such as border and conflict regions.

Chinese military observers pointed out that while the monetary worth of the deal is not high, this is the first time China has exported military-use aviation equipment to a European country, which will have great significance in Chinese arms firms’ position in the European market.

Wei said that other European countries that run on a tight military budget can now take a closer look at Chinese drones, such as the CH series and Wing Loong series.

Chinese arms firms have been active providers of military-use drones in the international market, as CH series and Wing Loong series drones can often be seen in the Middle East and Africa. As of December 2018, 100 Wing Loong drones had been delivered to foreign clients.

Chinese weapons and equipment are well known on the international market not only because of their high efficiency and low cost, but also good after-sales services and logistics support, observers said, noting that China does not attach political conditions to arms sales, unlike some countries such as the US. 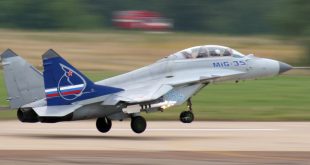