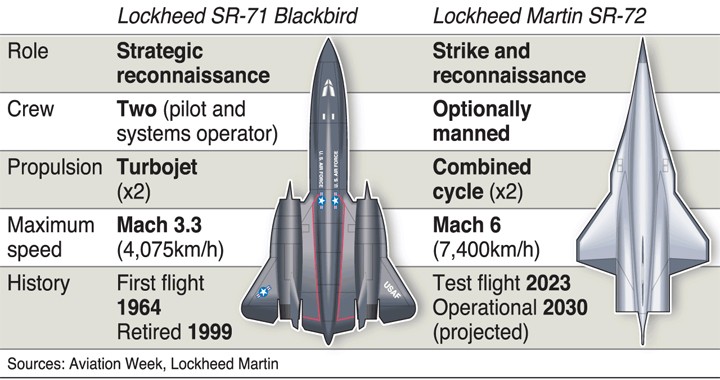 The SR-71 was capable of reaching speeds over three times the speed of sound, and the SR-72 is intended to have even more impressive specs. Built by Lockheed Martin in the 1960s, the SR-71 could reach speeds exceeding Mach 3 (above 2,200 mph). That’s over 3x faster than the speed of sound. The recon jets went out of service in 1998.

On Jan 11, 2018, Boeing unveiled a conceptual model for a new hypersonic jet that would replace the SR-71 Blackbird at the American Institute of Aeronautics and Astronautics SciTech forum in Orlando.

This ‘Son of Blackbird’ could become a high-speed strike and reconnaissance aircraft in the warfare of the future, travelling at Mach 5+ speeds that adversaries would have no time to react or hide.

Rumors of possible sightings have flooded the internet. Recently, an unmanned aircraft was seen at a Skunk Works facility. Reports say it could have been an early test for the SR-72. Lockheed confirmed plans to fly a research vehicle in the early 2020s. If all goes well, it may not be long before the fastest plane ever hits the skies

Lockheed’s division for advanced aircraft development commonly referred to as the Skunk Works, told Aviation Week that producing a formidable replacement for the SR-71, which was retired in 1998, has been delayed as they waited for hypersonic technologies to improve. Now, a new combined-cycle propulsion system that merges a supersonic jet engine with a rocket promises to offer the SR-72 performance that leaves its namesake in the proverbial dust. While the SR-71’s record-setting top speed is said to have exceeded MACH 3 (approximately 2,300 miles per hour) the SR-72, equipped with two hybrid jet/rocket engines could potentially surpass MACH 6 – depending on the aircraft’s design being able to manage the friction created by air traveling over its control surfaces at such high speeds.

“We’ve been saying hypersonics is two years away for the last 20 years, but all I can say is the technology is mature and we, along with DARPA and the services, are working hard to get that capability into the hands of our warfighters as soon as possible,” Rob Weiss, Lockheed Martin’s executive vice president and general manager for Skunk Works, said. 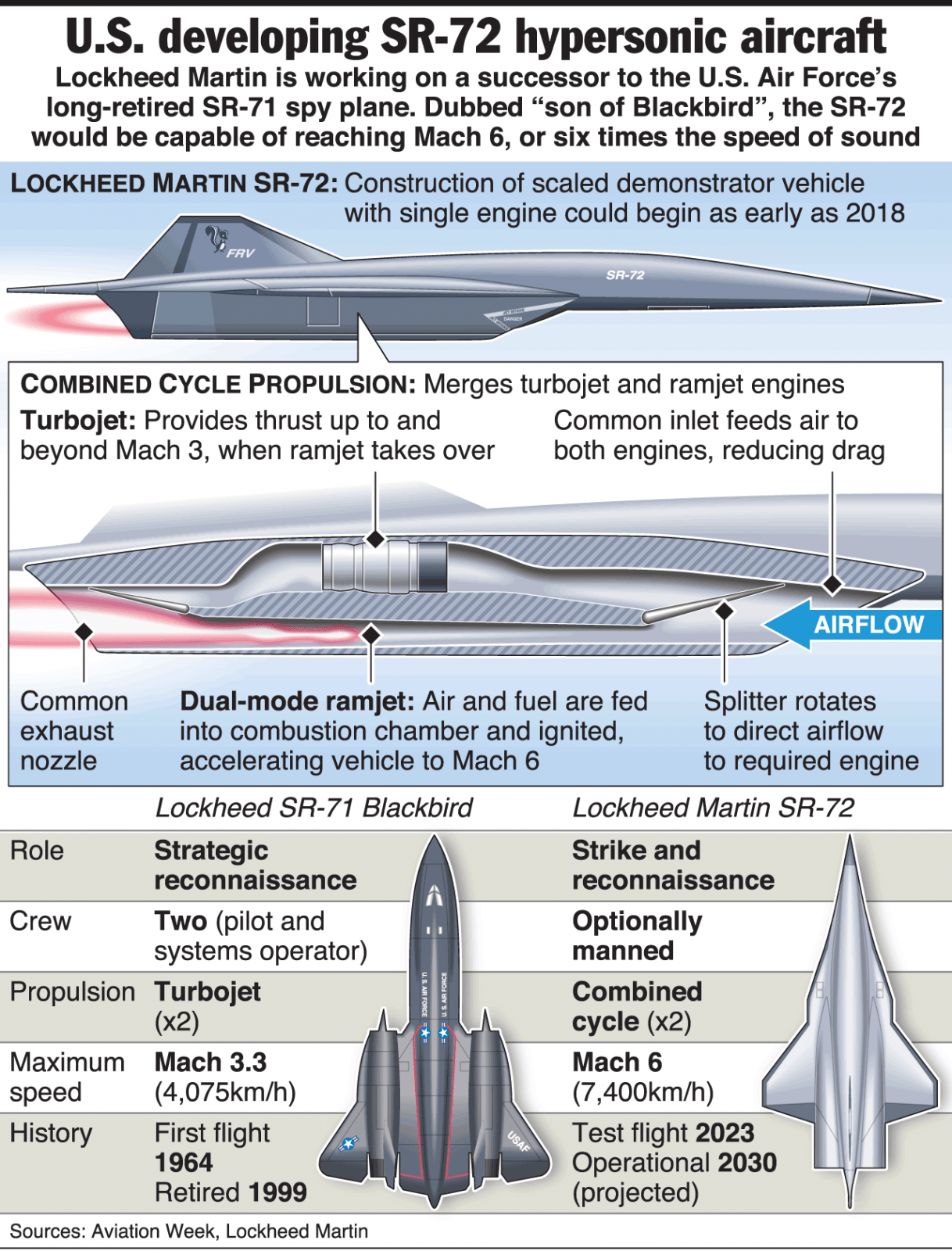 The focus in recent years has been placed primarily on a different Lockheed project intended to give the U.S. and its allies air superiority in the wars of the future: the F-35.

Last year, Lockheed confirmed that ground tests have been conducted on the engine that will potentially power the next generation of world-changing long-distance aircraft.

A combined-cycle engine that utilizes elements of ramjets and rocket engines has apparently been undergoing ground tests since the Air Force’s announcement in 2013. The engine is said to be the product of a partnership between Lockheed Martin and Aerojet Rocketdyne that was established in 2006.

Lockheed’s Skunk Works is now rapidly approaching setting to work on a full-scale flight research vehicle (FRV) to test the potential of the new engine platform. The FRV, which is expected to be about the size of an F-22, could potentially be a piloted craft, but may also be an unmanned drone. Their current plans call for the FRV to begin flights as soon as the early 2020s, followed soon thereafter by a full-size SR-72 demonstrator that will be equipped with two of the new, extremely powerful engines.

“Hypersonic aircraft, coupled with hypersonic missiles, could penetrate denied airspace and strike at nearly any location across a continent in less than an hour,” said Brad Leland, Lockheed Martin program manager, Hypersonics. “Speed is the next aviation advancement to counter emerging threats in the next several decades. The technology would be a game-changer in theater, similar to how stealth is changing the battlespace today.”

Little more has been announced about the SR-72, but if Lockheed’s timeline holds true, it could by flying high above our heads as early as the 2030s… but for now Lockheed is remaining tight-lipped about the performance expected out of the aircraft design, and if the SR-71 is any indicator, their secrecy will likely continue for some years to come.

Previous Here’s How Tom Cruise Learned To Fly A Crazy Helicopter Stunt For ‘Mission: Impossible’ Movie
Next IAF To Upgrade Its Sukhoi Su-30MKI With Radar Capable Of Detecting F-35 & J-20