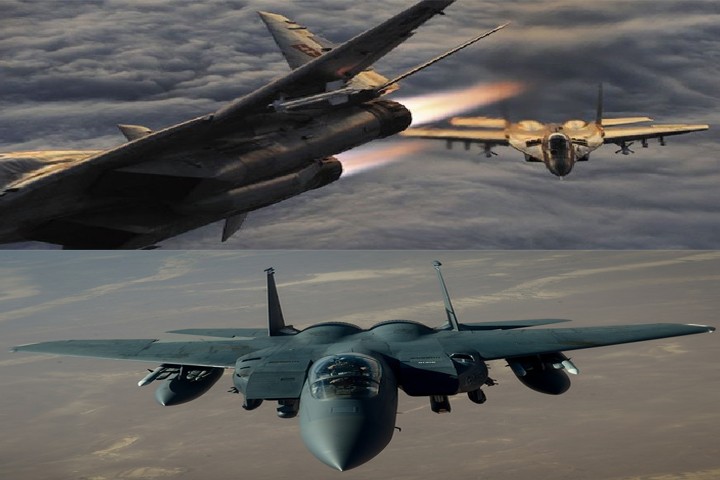 Capt. Tim Bennett served as a flight leader with the 335th Tactical Fighter Squadron. He flew a total of fifty-eight combat missions in the F-15E during the Iraqi conflict

As Bennett himself explained to Barry D. Smith for his article Tim Bennett’s War published on January 1993 issue of Air Force Magazine,

“We were based at Al Kharj AB in central Saudi Arabia. We lived in tents the whole time.

After the take-off, Bennett’s Mudhen (as the Strike Eagle is dubbed by its aircrews) refueled from a tanker and crossed the border just after an F-117 attack. He and his Weapons System Officer (WSO), who in that mission was Capt. Dan “Chewie” Bakke, passed Baghdad and began to search for the Scuds sites placed near an airfield called H-2:

“We wanted to hit all the fixed sites before they could launch against Israel. H-2 was looking really bad because they put up some fighters that night to try to get us. We had twelve planes going in there.”

About eighty miles out from H-2, they got some radar contacts from some MiG-29 Fulcrums and MiG-23 Floggers.

The Iraqi aircraft knew where the F-15Es were and moved to intercept them. A Fulcrum radar spiked Bennett’s Strike Eagle:

“We could see them coming down. They knew there were more than one of us and were trying to find the end of the train to work up the rear of the formation.

We got spiked and lost it, got spiked again, and lost it again. Everybody in our formation could keep pretty good track of them on radar and would lock a missile on to them as they approached.”

But to avoid to reveal their positions none of the American pilots wanted to shoot unless they had to.

Two Fulcrums and three Floggers were trailing the F-15Es and one Fulcrum came down the left side of the formation.

Bennett and Bakke could see the enemy fighter on their radar while it began to move across the formation and Bennet could see his image also in the head-up display (HUD), which displayed the FLIR image from the navigation pod.

The FLIR in fact gave him a small window to see the sky and terrain in front of its aircraft as if it were daylight. The MiG-29 pilot didn’t know that Bennett Strike Eagle was there, but he was trying to roll in on the F-15E about six miles in front of him.

Then, according to Bennett, all of a sudden, it just hit the ground and exploded. “I could see the wreckage spread out along the ground.”

The MiG-29 was trying to maneuver behind the F-15E in front of Bennet and due to the disorientation of the law night flight the Fulcrum flew into the ground:

“The MiG pilot was trying to converge on an aircraft moving at 600 knots at 100 feet altitude. He just got too low. It was pitch black, with no moonlight or lights from any cities. We would not even have seen him if not for our FLIR systems.”

Another MiG-29 came from the right side of the formation and engaged one of the forefront Strike Eagles.

Its pilot, afraid that the Iraqi Fulcrum was trying to shoot missiles head-on at him at low altitude, fired a Sidewinder at it but the AIM-9 lost the Fulcrum.

“After the mission, we put all the HUD FLIR tapes together to figure out what happened next,” recalls Bennet.

“We think this MiG-29 came around and got into a beam position on us and lost his radar lock, but we think his radar was in automatic acquisition mode and locked onto one of the Iraqi MiG-23 Floggers.

The Floggers didn’t have the systems to get down low with us and were up about 2,000 feet trying to get an infrared lock from the heat of our exhaust. The MiG-29 then shot a missile and destroyed the Flogger.”