Taiwan unveiled a prototype of Taiwan’s new indigenous advanced jet trainer (AJT), named “Yung Yin (勇鷹)” or Brave Eagle, was unveiled on Tuesday, as part of the country’s effort to become more self-reliant regarding its defense.

At the unveiling ceremony in Taichung, President Tsai Ing-was said the advanced jet trainer was a milestone achieved by the Republic of China (Taiwan) Air Force and aerospace industry, with many difficulties along the way.

Since the AJT project was launched in 2017, it has created 1,200 jobs and it is expected to employ another 800 people in 2021 as half of the contracts will remain in Taiwan, Tsai said.

A budget of NT$66.8 billion (US$2.1 billion) was allocated to the project for the research and development of the prototype and production of 66 AJTs, according to the president.

Su Tzu-yun, a research fellow at the Institute for National Defense and Security Research, told CNA the aircraft could be quickly converted, if necessary, into a warplane.

Su said the supersonic jet trainer, also known as XAT-5, could carry out air-to-ground attack missions overland and at sea in the event of a war. Ma Wan-june, president of the government-funded Aerospace Industrial Development Corp (AIDC), told CNA that for confidentiality reasons, he could not confirm whether the plane had combat capabilities, the report said.

Su added that production of 66 AJTs would help augment Taiwan’s fighter jet fleet, as out of the 250 Indigenous Defense Fighters (IDFs) originally slated for production, only 131 were actually built.

While inheriting some aspects of the Ching-kuo jet fighter such as low air resistance and high attack angle, the AJT has greater fuel capacity and a larger landing gear for a more stable ground run, the MND said.

The Brave Eagle will replace the military’s decades-old AT-3 trainer aircraft and F-5E/F lead-in fighter trainer, the MND said.

The AJT project was commissioned to the AIDC in April 2017 and got off the ground in June 2018, on the basis of an agreement signed in February 2017 between Taiwan’s Air Force and the National Chung-Shan Institute of Science and Technology (NCSIST).

Flight testing of the new plane is expected to start in June 2020, and the 66 AJTs are scheduled to be delivered by 2026, according to the MND. 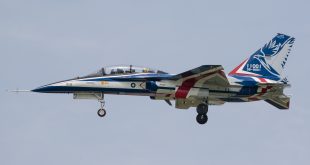