On 30 December 2020, Pakistan Aeronautical Complex celebrated the completion of dual-seat JF-17 aircraft for PAF and formally launched the production work of Block-III JF-17 aircraft in a ceremony held at Kamra.

According to the reports, the production rate of the JF-17 combat jet has been also ramped up with China and Pakistan managing to reduce production period of each jet by 15 days.

A report published by China Aviation News affiliated with state-owned AVIC company stated: “Production line of the JF-17 has on average shortened the production period of a single aircraft by 15 days compared to last year.”

In December last year, the latest iteration of the jet, the JF-17 Block III, took to the skies for the first time.

According to state media, the jet features technologies from China’s J-20 stealth fighter jet and upgrades in electronic devices that will significantly increase its combat efficiency. These include a large holographic wide-angle head-up display and integrated cockpit display besides an advanced infrared missile approach warning system used in the J-20 fighter jets.

The JF-17 Block III has garnered considerable attention from potential buyers mainly due to its headline features- a Chinese active electronically scanned array (AESA) radar, the latest targeting and electronic warfare systems analogous to those found on much more expensive aircraft such as the F-16 and Jas 39 Gripen.

The jet also reportedly packs information-based warfare capability and upgraded weapons. It has an upgraded engine which will allow it to go farther, the ability to engage some 30 targets simultaneously, and will be equipped with more ordnance over the JF-17 Block II. 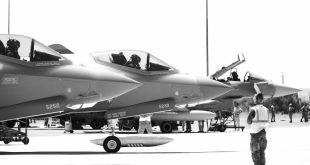