The service says this is an “unusual and compelling urgency acquisition” and comes ahead of a formal competition to decide on the F-15EX’s powerplant, with Pratt & Whitney expected to submit their F100-PW-229 engine as an alternative.

The Pentagon first announced the deal for the F110-GE-129s, which also “including installs and spares and modernized engine monitoring system computers,” in its daily contracting notice on June 30, 2020.

The award is valued at $101,345,500 and the Air Force Life Cycle Management Center expects to have all the engines and associated items and services delivered by Nov. 30, 2022.

This first batch of F-15EX engines is being procured sole-source because of “an unusual and compelling urgency acquisition,” according to the announcement. The GE engine is the only one certified for the F-15Q, which the F-15EX is based, and competition was waived on this batch in order to expedite testing of the F-15EX.

This particular engine is the only one that Boeing has already certified to work with Advanced Eagle models, including Saudi Arabia’s F-15SA variant and the newest F-15QA for Qatar. The F-15EX is derived from the F-15QA, which is presently the most advanced F-15 variant in production. The F110-GE-129 also powers South Korea’s F-15K Slam Eagles and Singapore’s F-15SGs.

Subsequent buys of F-15EX engines, however, will be open to competition, the Air Force said in May. In February, Pratt & Whitney—now part of Raytheon Technologies—protested an early decision to just buy the F110 powerplant for the whole F-15EX fleet, and the Air Force in March dropped its plan to use the GE engine exclusively.

The service will need up to 461 new engines to power as many as 144 F-15EX fighters. Pratt is planning to offer its F100-229 engine, but would have to certify the engine for the “Advanced F-15” at its own cost. The Air Force said testing can take place “concurrently” with production.

No obstacles are seen to the integration of the Pratt engine. The company noted it is the “exclusive propulsion system for USAF’s entire fleet of operational F-15s.” The service wants up to six competed engines to be delivered per month, with the first deliveries in 2023. 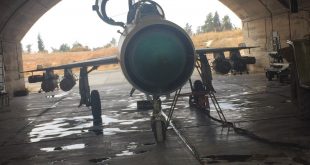 Syrian mig-21 Armed and fueled, in its reinforced hangar. Credits: Murad Gazdiev While no Eagle …