The US Air Force’s highly touted SHiELD airborne laser weapon has hit yet another setback, raising questions about the program’s long-term viability.

The U.S. Air Force’s long-planned test delayed until 2023 due to technical challenges and complications spurred by the ongoing coronavirus pandemic, its program head said.

The Air Force’s Self-Protect High Energy Laser Demonstrator program, or SHiELD, had originally planned to conduct its first flight demonstration in 2021, but the test has been pushed two years back, said Jeff Heggemeier, SHiELD program manager for the Air Force Research Laboratory.

“This is a really complex technology to try to integrate into that flight environment, and that’s ultimately what we’re trying to do with this program, is demonstrate that laser technology is mature enough to be able to integrate onto that airborne platform,” he told Defense News in a June 10 interview. “But even things like COVID and COVID shutting down the economy. That has impacts.”

Beyond that, the future of using laser weapons aboard fighter aircraft is even more unclear. The goal of SHiELD was to give combat jets a way to counter missiles shot by an enemy aircraft or by air defense systems on the ground.

Asked what that meant for SHiELD, Air Force acquisition czar Will Roper acknowledged that the service is rethinking how it could best use directed-energy technologies. Perhaps the most optimal use for SHiELD wasn’t onboard a fighter, he said.

“What I’ve told that team is, let’s have a dialogue,” Roper said during a June 9 event hosted by the Mitchell Institute for Aerospace Studies. “Let’s understand the different power levels and what they should correspond to, and let’s not make the highest power level that we can dream up and the mission that’s the sexiest be the thing that drives us.”

“What I expect to get laser weapons to the goal line has been the humble, but important and very worrisome small drone threat. They continue to show up, they’re difficult to attribute — we don’t know who is sending them to our installations and tests and things of that nature, and we can’t afford to shoot missiles at them,” he added. “So this is a perfect threat to make laser weapons real, and once they’re real, we’ll do what the military does. We’ll look to scale the power.”

Heggemeier said there are many ways the Air Force could spin off laser technologies developed by the SHiELD program, but it’s critical the service continue with development so it can gauge the maturity and usefulness of the capabilities.

“I think it’s important for us to first remember what the whole point of SHiELD is. The whole point of SHiELD is not an acquisition program where we’re turning out hundreds or tens of these laser systems for operational use. What we’re trying to do with SHiELD is exactly answer those questions of: ‘Is laser technology mature enough to go on an airborne platform? Have we solved enough of those technical challenges that this is now a feasible thing?’ Because there is that concern.”

SHiELD is comprised of three elements: the laser itself, which is being developed by Lockheed Martin; the beam control system made by Northrop Grumman; and the pod that encases the weapons system, from Boeing. Heggemeier said the pod is under construction, with integration of the laser and beam control system planned to start next year.

“A lot of the challenge is trying to get all of this stuff into this small pod. If you look at other lasers that are fairly mature, we have other laser systems that some other contractors have built that are ready to be deployed. But these are ground-based systems, and they are much, much more mature,” he said. 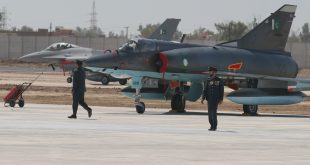