The U.S. Army successfully launches a drone from a flying helicopter, sending the unmanned aerial vehicle downrange and then receiving a live video feed from it.

The test took place on March 4 at Yuma Proving Ground in Arizona. A UH-60 Blackhawk fitted with external pylons typically reserved for fuel tanks, rockets, and missiles was instead fitted with a long, slender canister. Once in the air, the Blackhawk launched an Air-Launched, Tube-Integrated, Unmanned System (ALTIUS 600) drone.

“The impulse pushed the air vehicle out of the tube forward, into forward flight, and the rotor downwash didn’t knock the small drone down,” Rugen said in a recent interview. “We were able to launch them at about 100 feet above the ground, which is, we feel, a relevant tactical altitude to maintain the survivability of our manned aircraft.”

The ALTIUS drone ejected from the canister, popped a pair of wings, and flew under the command of the Blackhawk. The drone also provided a live video feed to the Blackhawk crew.

The teaming of helicopters with so-called “air-launched effects” systems will make piloted helicopters more effective and survivable on the battlefield while pairing them with drones that can search for and then destroy enemy targets.

Unlike other aircraft, launching a drone from a moving helicopter is trickier. Once launched, the drone must immediately fly through the downwash created by the helo’s rotors and winds created by the forward movement. Once clear of that the drone can fly normally.

After launching, typically from a tube on the ground or mounted on a vehicle, ALTIUS can either be flown with a handheld remote control or programmed by a ground control station to navigate to a certain point. Designed to be recoverable, ALTIUS can be set to land on any relatively level surface, according to the Army.

“We’re pretty proud of our [science and technology] community for delivering that so quickly,” Rugen said. “That low-altitude launch from a rotorcraft of a small drone that then can fly forward into the dangerous and dirty environments that we need it to fly into because we don’t want to put a manned platform in there.”

When advanced rotorcraft like the Future Attack Reconnaisance Aircraft (FARA) and Future Long Range Assault Aircraft (FLRAA) head into combat, they will be targets for enemy long-range precision munitions. The Army wants to arm those aircraft with their own fleets of “semi-attritable” unmanned systems that will expand the manned platform’s situational awareness and perhaps deliver ordinance on enemy targets before the helicopters are within range of enemy fire.

“That small drone will give us the ability to fly up to the edge of our standoff, our weapon-engagement zone of the enemy,” Rugen said.

The drones would be launched to find and fix the location of enemy ground positions and “high-payoff” targets.

“Once they find them and fix them, we’ll be able to finish them with the right shooter,” Rugen said. “If that shooter happens to be long-range precision fires or a joint asset or an Army aviation asset, we’ll be able to deliver that with all the information that air-launched effects give us.” 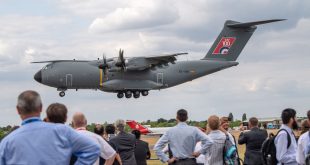