Unusual Activity By PLAAF Detected Along With The LAC: IAF Chief

Tensions between the world’s two most populous countries have risen to their highest levels in more than four decades after 20 Indian soldiers were reportedly killed in hand-to-hand combat in the Himalayas.

India has detected unusual movement of China’s People’s Liberation Army Air Force (PLAAF) along the border in Ladakh and put in place its own strategy to respond to any contingency, Chief of Air Staff Air Chief Marshal RKS Bhadauria said on Saturday.

As we have previously reported, the Satellite Imagery that Shows PLAAF Fighter Jets Deployment Along With The LAC.

In Hyderabad for the combined graduation day parade at Air Force Academy, Dundigal, he said the Indian Air Force (IAF) was aware of China’s air bases and the deployment along the LAC.

“During the summer, there are usual exercises. But at this time, we have noticed more than usual deployment. We have taken the necessary action,” he said while explaining why IAF had moved its aircraft to the forward air bases.

Asked if India would go to war with China, the air chief said: “No, we are not at war with China. But we are prepared for any contingency. All efforts are being made to solve the situation at the LAC peacefully.”

In the backdrop of the biggest confrontation with Beijing in over five decades on June 15 in which 20 Indian soldiers, including a Colonel, were killed, the IAF chief said these were “unacceptable Chinese actions”.

“We will never let the sacrifice of our braves of Galwan go in vain,” he asserted. Asked if China had an advantage over India, the air chief said, “Rest assured, our armed forces are capable of handling the situation.”

However, Bhadauria would not go into details on whether the Chinese army had crossed 2km into the LAC. “Have faith in the Indian Army.

It has come out with information about what happened. We don’t have to give any message to the adversary because the adversary knows our capacity,” he said and added that air patrolling in the Ladakh region has been increased.

On indigenous production of aircraft for India, he said the design of LCA Mk2 is progressing and in next 15 years, IAF will have 300 aircraft all manufactured indigenously. “We have to now create an eco-system for manufacturing,” he said.

As many as 123 graduating officers were awarded the President’s Commission during the the combined graduation parade on Saturday. Eleven officers of the Indian Navy and Coast Guard also earned their wings apart from two officers of Vietnam Air Force, who too passed out.

In his speech, the Air Chief paid tributes to Colonel Santosh Babu and 19 soldiers who were killed in the clash with Chinese soldiers. “Their gallant actions in a highly challenging situation have demonstrated our resolve to protect the sovereignty of our country – at any cost,” he said.

He said the graduating officers would go straight to their units and not take a break. “The security scenario in our region mandates our armed forces to remain prepared and vigilant at all times,” he added. 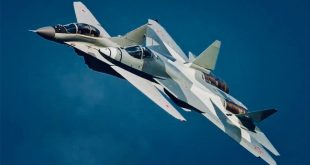 Russian Su-57 and MiG-35 Next Generation Fighters – Credits: Russian Airforce As we have reported …