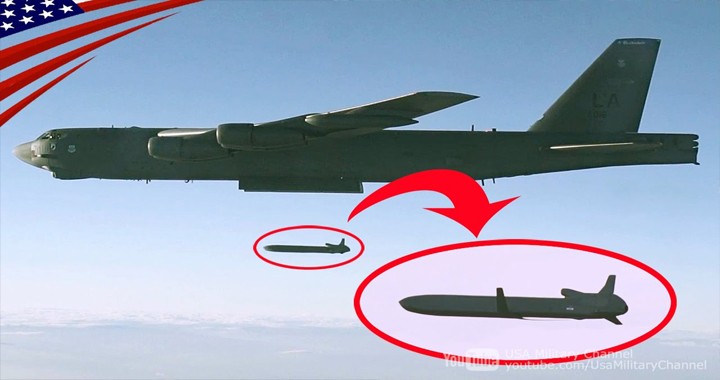 In this article, we will share with you Video of B-52 Stratofortress unleashing a 20 feet long $1 Million Nuclear Missile

The AGM-86 is an air-launched cruise missile designed for use on the B-52 Stratofortress. This gigantic missile has a weight of over 3,000 lbs, a length of 20 feet and packs a killer punch.

The AGM-86 sports a price tag of $1,000,000 due to its nuclear armament and pinpoint precision when locating targets.

Due to its cruising capability, this missile can be launched far from combat zones without putting the B-52s in harm’s way. The AGM-86 may cost a lost but as you can see in this video clip you certainly get some bang for your buck.

The Boeing B-52 Stratofortress is an American long-range, subsonic, jet-powered strategic bomber. The B-52 was designed and built by Boeing, which has continued to provide support and upgrades. It has been operated by the United States Air Force (USAF) since the 1950s.

The Boeing B-52 Stratofortress has been a mainstay of the United States Air Force for over 60 years and keeps going strong.

The B-52 stands by two sayings

This bomber has an impressive array of weapons in its arsenal, but the big standout has to be the Boeing AGM-86 cruise missile.

The AGM-86 ALCM is an American subsonic air-launched cruise missile (ALCM) built by Boeing and operated by the United States Air Force. This missile was developed to increase the effectiveness and survivability of the Boeing B-52H Stratofortress bomber. In combination, the missile dilutes an enemy’s forces and complicates air defense of its territory.