Russian flight test center flew a Su-57 stealth fighter jet without a canopy to better assess the stresses and strains on the aircraft and pilot during an emergency egress procedure.

The full video, seen below, was posted on the Russian Ministry of Defense’s YouTube channel shows the “cabriolet version” of the Su-57 advanced combat jet appears around the 1:10-minute mark.

The footage clearly shows the test pilot, apparently wearing a non-standard protective flight suit, at the controls of the Su-57 at altitude over Russia, presumably operating from the Akhtubinsk test center.

The cockpit windscreen remains in place, while the rear portion has been removed entirely, including the framework.

The Su-57 Felon bort number “058” took part in, as revealed in a documentary video produced to celebrate the 100-year anniversary of the establishment of the 929th Chkalov State Flight-Test Center at Akhtubinsk, in southern Russia’s Astrakhan region.

Also known as T-50-8, this aircraft made its maiden flight from Komsomolsk-on-Amur in the Russian Far East on November 17, 2016. Although this was the eighth prototype, it was actually the seventh to fly, as T-50-7 was completed solely for static tests on the ground. 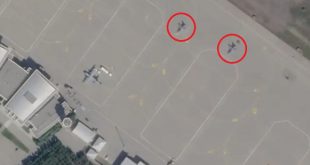