on Nov. 13, 2020, An Antonov An-124 Ruslan (NATO reporting name: Condor), belonging to Volga-Dnepr Airlines, an airline based in Ulyanovsk, Russia, and specialized in air charter services, with 14 people on board, overran the end of the runway at Novosibirsk, Russia. No one was injured but the aircraft was heavily damaged.

On landing, the airlifter’s nose landing gear collapsed and it skidded off the end of the snowy runway. Despite several pieces of engine debris landing on a populated area, no injuries have been reported so far.

The aircraft, registration RA-82042, experienced what has been reported as an uncontained engine failure during the initial climb after takeoff from RWY 25 at Novosibirsk.

The crew returned for an emergency landing on the same runway and performed a successful and seemingly normal touchdown but did not manage to stop the landing roll: the aircraft went off the tarmac by about 200 meters.

Images coming from Novosibirsk show substantial damage to the engine, wings, nose gear (that collapsed) and fuselage, that appear to have been penetrated by debris at multiple locations near the wing root. This may also explain why Mode-S data was lost at 05:10:09 UTC (12:10 LT), shortly after take off, as the RA-82042, flying as VDA4066, was on right hand turn climb through 1,825 ft.

The following video shows the aircraft’s landing and subsequent overrun:

Videos of the incident show the An-124 coming in to land at Novosibirsk International Airport in a tight banking turn, before touching down on runway 25, around two minutes after it had taken off. The An-124, which weighs over 390,000 pounds when unloaded, overran the end of the runway by around 650 feet, with its nose undercarriage collapsing in the snow. 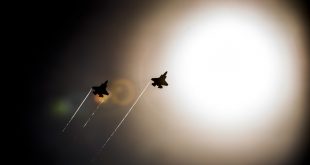 F-35 Stealth Fighters Availability For Missions Is Around 50%: Robert Behler