Pilot Lt. Col. Joe Matthews and I were on our first operational tour at Det 1, Kadena AB, Okinawa, Japan.

The mission profile took us west on an ELINT collection over the South China Sea and then east across the DMZ in Korea. We were in the acceleration after our initial refueling.

At about Mach 1.5, we felt a sharp jolt that shook the aircraft violently.

We both passed it off as clear air turbulence and pressed on. After a while, Joe remarked that the trim didn’t look right so I calculated a manual CG (Center of Gravity) and confirmed that for our fuel indications, it was correct, although the CG seemed to be moving all over the place.

By now we noticed we were about three thousand pounds low on the fuel curve and rapidly getting farther behind. The autopilot kept kicking off. The aircraft would not stay trimmed. At last, we were so far down the fuel curve that there was no alternative but to abort back to Kadena.

The descent gave us plenty of upstarts as I broadcast the appropriate HF message, admitting our failure to the whole world. The new guy paranoia crept in as we wondered what we had screwed up.

The approach to runway 05R was uneventful, and Joe made a perfect landing. Then, as we both spouted expletives, we realized there was no reassuring tug from the drag chute — it had failed, or so we thought.

Some judicious braking and rapid-fire discussion over the radio about arming/disarming the barrier, and the SR was brought to a safe stop. As we taxied into the hangar, a lot of ashen-faced maintenance folks were pointing at our jet.

The jolt we had felt earlier on the acceleration was caused by the right drag chute door popping up into the slipstream and ripping loose from the aircraft.

As the drag chute door departed, it acted like a can opener on fuel tank 6 and cut a ten-inch gash that allowed fuel to siphon out.

The fuel leak caused our trim and CG transients that even the autopilot couldn’t keep up with. With no drag chute doors, the drag chute had departed the aircraft and was lost at sea.

We were grateful to the Lockheed engineers for designing the drag chute to lock to the aircraft only when the drag chute handle was pulled. One can only imagine the effect of the chute deploying in-flight at Mach 1.5!”

The first chute to be ejected was called the “pilot chute” (forty-two-inch diameter). When it hit the air stream, its job was to pull out a slightly larger chute called the “extraction chute” (ten-foot diameter), which produced aerodynamic lift. Both of those two chutes dropped on the runway.

When the extraction chute hit the air stream, it pulled the safety pin holding the main chute in place. With the safety pin removed, the main chute (forty-foot diameter), which was connected to the aircraft, was now free to deploy and decelerate the sixty-thousand pound (plus fuel) SR-71. The chute was jettisoned onto the runway at fifty-five knots during the landing rollout. 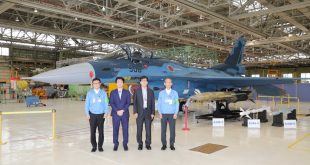 Japan has got it’s deadly anti-ship ASM-3 missile ready. The ASM-3 is a supersonic missile …