It first entered service in 1961 with the Navy. The F-4 Phantom II remained in service till 1996. As of 2020, 62 years after its first flight, the F-4 remains in service with Iran, Japan, South Korea, Greece, and Turkey.

Here are the details of how the U.S. Project Top Flight program was initiated to sets an absolute altitude record.

Just 31 months after its first flight, the F-4 was the U.S. Navy’s fastest, highest-flying, and longest range fighter. The twelfth aircraft off the line (BuNo 145311) was officially devoted to Aircraft and Engine Performance. In practice, this meant the World Speed Record program. Spurred by the results of the second stage of NPE (Navy Preliminary Evaluation) from July 1959, the Navy naturally wanted to put the F4H-1’s spectacular performance in the record books.

Tragically, the first attempt at a world altitude record, Project Top Flight, cost the life of a company test pilot, Gerald Huelsbeck, when on its 295th flight the first prototype shed an engine access door in a high altitude zoom climb above Mach 2, and the subsequent fire destroyed the aircraft. “Zeke” Huelsbeck was imprisoned in the cockpit by unsurvivable g-forces.

As explained by Peter E. Davies in his book Gray Ghosts, U.S. Navy and Marine Corps F-4 Phantoms, the second prototype (BuNo 142260) were equipped with water injection and flown by CDR Lawrence E. Flint in a series of twelve ballistic zoom climbs from 50,000ft at maximum power between October and December 1959. The aircraft was stripped of radar and other non-essentials, including the rear seat. Engine rpm, fuel flow rates, and afterburner nozzle settings were all tweaked for higher thrust. CDR Flint reached speeds up to Mach 2.41 just before reaching Edwards AFB air space and pulling up for the 3.5g, fifty-degree zoom climb to be measured.

Towards the peak of each vertical climb fuel flow was cut to prevent overheating as the afterburners “blew out” from lack of oxygen above 65,000 ft. In the pure, unpolluted atmosphere, darkness was so intense that when Flint’s shadow fell on the instrument panel he could not see the dials at all. At the top of the zoom the engines were shut off, speed dropped back to around 45 mph, and the aircraft entered a dive to 45,000 ft for an engine re-light and pull-out to controlled flight.

When the aircraft landed much of its orange paint had been stripped off by the heat generated on Flint’s low altitude run-in. The outer windscreen panels were also distorted by the heat.

On one flight CDR Flint was unable to shut off the right engine as he neared the apex of his climb until it had exceeded 120 per cent rpm and the TOT had gone off the scale. Luckily it held together, and on post-flight inspection it was found that up to half an inch had melted off the outer end of each turbine blade.

To a potential enemy these spectacular flights were a dramatic proof of the new aircraft’s potential as a high-altitude interceptor.

Larry Flint, who had commanded VF- 11 Red Rippers in the Korean War, had been a test pilot since 1944 and he went on to become Chief Test Conductor for the Apollo space program and manager of the F-14 Tomcat Aircrew Training Program for the USN and Iranian Air Force. 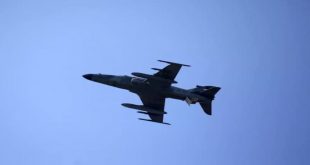