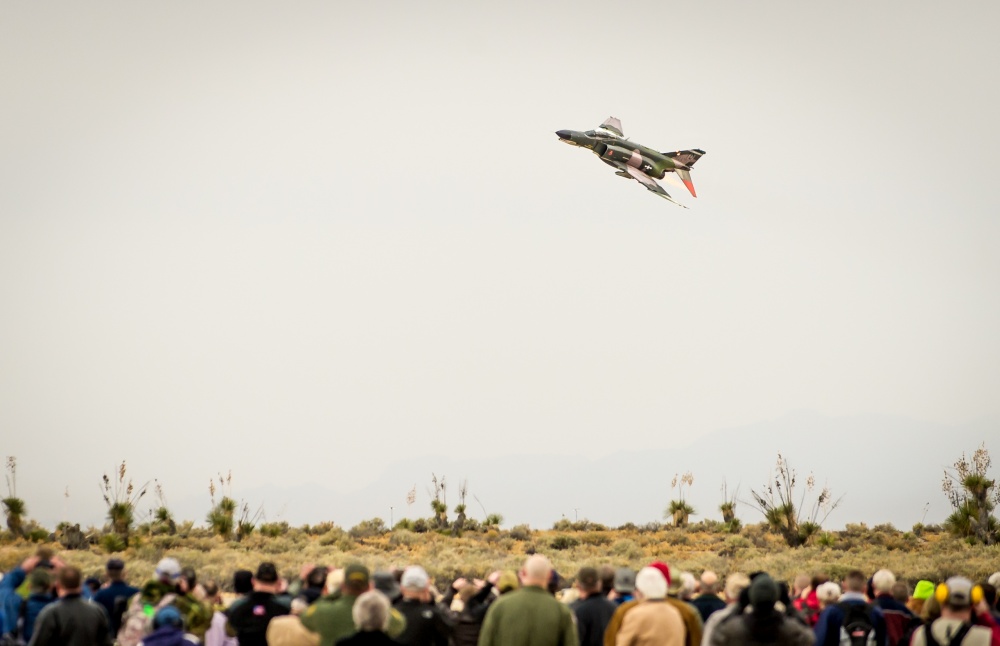 The F-4 Phantom II entered the U.S. Air Force (USAF) inventory in 1963 and was the primary multi-role air in the USAF throughout the 1960s and 1970s. The F-4 flew bombing, combat air patrol, fighter escort, reconnaissance, and the famous Wild Weasel anti-aircraft missile suppression missions.

It was also flown by thousands of Navy and Marine Corps aviators.

On Dec. 21, 2016 the final variant of the legendary Phantom II, the QF-4 unmanned aerial target, performed its last flight at Holloman Air Force Base (AFB), N.M..

As he slides his hands across the edges of the wings and walks from nose to tail, inspecting all aspects of the jet, a wave of emotion begins to hit Jim Harkins.

His weathered features appear calm and determined, but they hide the tears he is fighting back.

While he walks around the aircraft, he greets each maintainer and says, “Thank you.” Harkins rubs and tap the bulging nose of the QF-4 Phantom II, like an aged cowboy saying hello to a trusty steed, and then climbs the cockpit.

“One last time,” Harkins says and the canopy closes around him.

It’s not really sad, because in the military you get used to a lot of lasts, but it’s humbling,” Harkins said.

Harkins isn’t the only one feeling nostalgic and emotional about the aircraft affectionately referred to as Old Smokey.” Hundreds of “Phantom Phixers,” “Phantom Phliers” and “Phantom Phanatics” gathered on the Flightline at Holloman Air Force Base, New Mexico, to watch the final F-4 flight. 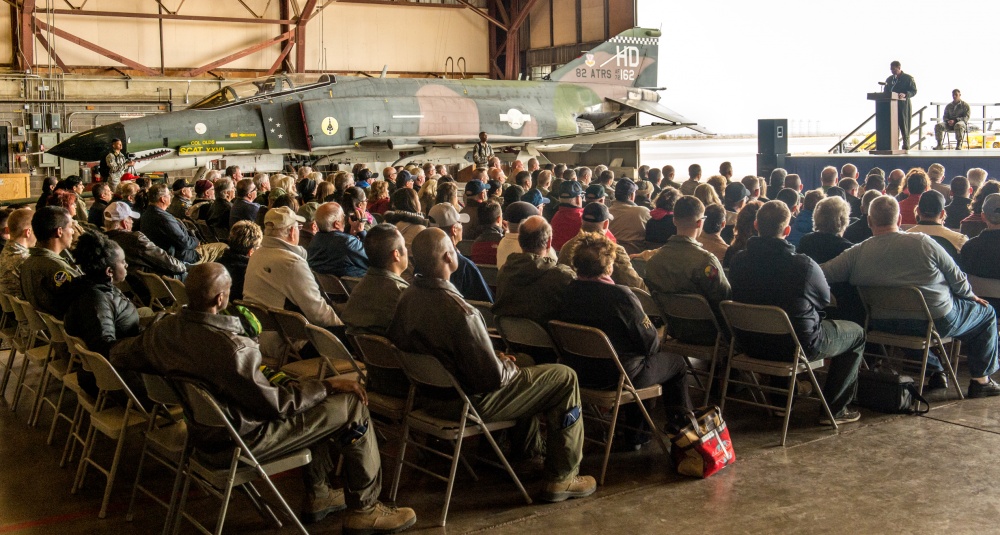 Some used to work on the aircraft, some are just fans and others, like retired Col. Chuck DeBellevue, had the privilege of actually flying the fighter.

DeBellevue flew the F-4 in Vietnam, where he had six confirmed kills – two against the Mikoyan-Gurevich MiG-19 and four against the MiG-21, the most of any U.S. aviator during the war.

He’s not just saying farewell to an amazing machine, he’s saying goodbye to an old friend.

“A friend who got me home more times than I care to remember,” DeBellevue said. “Being back on the flight line today brought back a lot of memories, not all are good. I lost a lot of friends, but it was a great airplane. I loved to fly that airplane. It’s very honest and it got me out of a lot of tight spots during the war”

DeBellevue recalls the Navy originally bought the F-4 to be a fleet interceptor and the Air Force bought it in 1963 to do everything – and it did do everything. It served as the primary air superiority fighter for both the Navy and Air Force, but it also served roles in ground-attack and aerial reconnaissance and, once taken out of active service, was designated the QF-4 where it flew as aerial targets.

The F-4 was a workhorse weapons system for the Air Force through the 1990s and it still holds the distinction of being the first multi-service aircraft. During its heyday, the F-4 set 16 speed and altitude records and demonstrated its effectiveness time and again throughout its lengthy career.

The Phantom looked cool doing it, too.

“You didn’t get into the F-4, you put it on, it became you,” DeBellevue said. “It was a manual airplane, not like an F-16 or F-15, they were aerodynamic and designed well. The F-4 was the last plane that looked like it was made to kill somebody. It was a beast. It could go through a flock of birds and kick out barbeque from the back.” 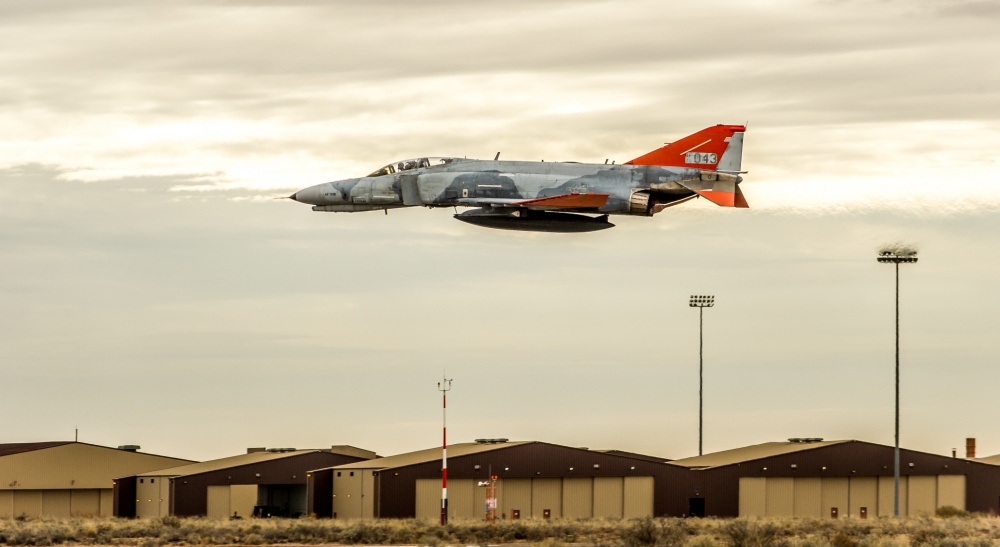 On the flight line at Holloman, the final flight of four F-4s prepare to take off for the last time.
The engines rumble and smoke flies.

In his jet, Harkins looks over the crowd, dancing in the cockpit, revving up the on-lookers and saluting those in attendance. Everyone cheers as the final four F-4s begin their last taxi.

“I don’t want to sound cheesy, but every time I get into the F-4 I can’t help but think of all the stories of all the pilots and all the maintainers who made this aircraft great,” King said. “The history and the heritage to me is the biggest satisfaction of flying the airplane.”

King had no concept when he became the squadron commander he would be the last active-duty pilot. It didn’t really set in until he and Harkins began taking the F-4 on a farewell tour during to air shows and aviation expos last year. King felt obligated to take the F-4 on the road, to give admirers the chance to see it, touch it and share their stories one last time. It was then he realized this tour piloting the F-4 would be something special.

“It’s going to be sad to shut those engines down for the last time, but she’s served our country well,” King said of the F-4. “It’s exciting too, because our mission is to provide full-scale aerial targets and we are going to be able to do that now with an airplane that’s better suited, provides higher performance and is more representative of the threats we face today in the QF-16.”

King said it was getting more and more difficult to keep the F-4’s in the air, and the only reason the QF-4 lasted as long as it did was because of the maintainers of the 82nd ATS.

Unfortunately, he says, there is no longer a need for the F-4. All remaining aircraft will be de-militarized at Holloman and used as ground targets at the White Sands bombing range.

King says most people don’t like to hear the fate of the last F-4s, and he understands, but it’s too costly to maintain as a heritage piece or to preserve them for museums.

“At the end of the day, the Air Force isn’t real sentimental,” King said. “It will have a warrior’s death.” 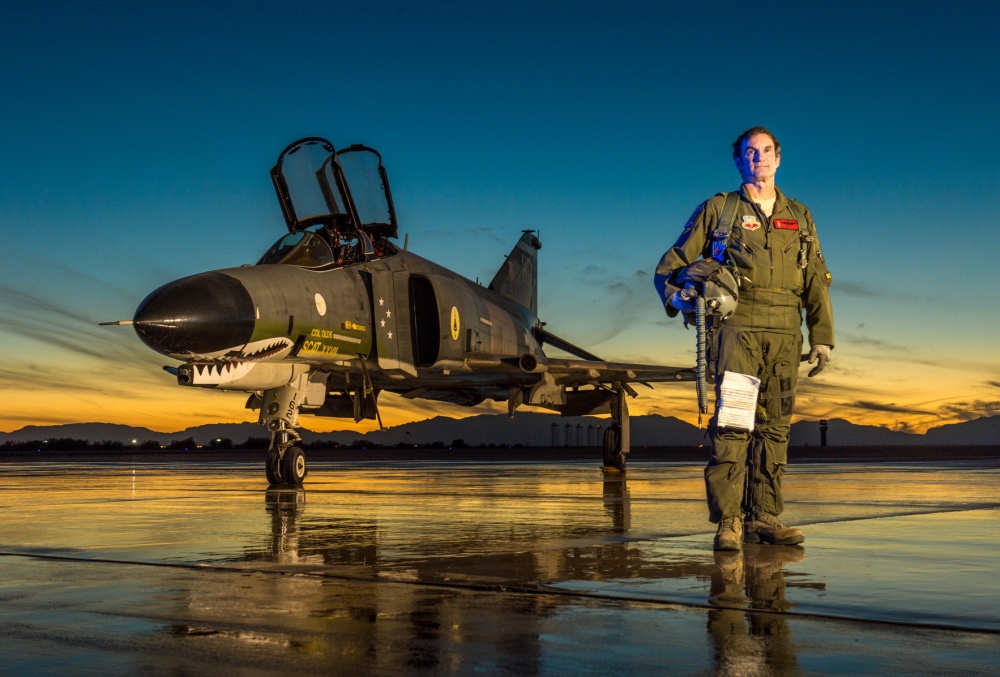 Engines roar and a flume of dust and smoke signals to the crowd the final four F-4s are off. The first two jets, piloted by King and Schreiner take off in a two-ship formation. Harkins follows in the third position and Vold in fourth. The last two jets perform an unrestricted climb, staying low to the ground in afterburner before pulling into a vertical climb at the end of the runway. The crowd goes crazy.

The sound of the F-4 is distinct. As Harkins passes over the crowd in a low-altitude turn it sounds like the jet is ripping the sky.

Multiple passes are made in four-ship, two-ship and stacked formations over the crowd of hundreds in attendance. Camera shutters clicking at a furious pace can be heard down the tarmac.

Out of nowhere, the sky cracks open and multiple booms shake the ground, buildings and cars, setting off alarms across the base. The concussions signal the F-4s going supersonic high above.

Harkins swoops down out of the sky passing over the crowd multiple times, and makes his final approach. As his wheels touch back to Earth, Harkins enters the history books as the last pilot to fly 1,000 hours in the F-4.

“I can’t imagine a better way to go out than with the F-4, it’s a special moment and a special jet and then … done,” Harkins said. “Although I flew F-16s and I went down to the F-4, but I consider myself going out on top.”

As climbs down from his jet he’s doused with water from his comrades and sprayed with champagne. In the distance, King lands his F-4 and with the front landing gear touching the asphalt, the history books close on the aircraft’s legacy.

But while the Phantom’s time in the sky may be over, the tales of its exploits are far from done. For those who flew the F-4, there is always time to wax poetic about the good ‘ole days, tearing across the wild blue yonder on “Old Smokey.”