According to the pilot, the events described took place at the height of the 1999 East Timor crisis, when violence erupted on the eastern half of the island of Timor, a former Portuguese colony, after it had voted overwhelmingly for independence from Indonesia.

The Indonesian military had occupied East Timor for the previous 24 years, maintaining a brutal rule and seeking to eliminate any resistance from the insurgents that resisted Jakarta’s rule. In the wake of the independence vote in August 1999, pro-Jakarta militias, backed by Indonesian security forces, stepped up their attacks on East Timorese civilians. With 2,600 people killed in a three-week period, and many thousands more displaced, international concern began to mount.

The Indonesian Air Force was ostensibly tasked with covering the withdrawal of Indonesian forces from East Timor, but with deployments of combat jets to West Timor and an Indonesian Navy task group patrolling the waters off East Timor, the United Nations, which had overseen the election, was worried about possible retribution from Indonesia in the form of military intervention.

With the Indonesian Air Force at increased readiness to respond to the tense situation in East Timor as of September 1999, Captain Henri found himself deployed to Kupang Air Base, in West Timor. At the time, Henri explains, the base was hosting two-week rotations of three Hawk jets and the pilots had orders to shoot down any unauthorized aircraft entering Indonesian airspace.

Four days after arriving at Kupang, on September 16, Henri says he was tasked with a routine combat air patrol (CAP) mission. The flight lead for the sortie was Captain Azhar “Gundala” Aditama in single-seat Hawk Mk 209 serial number TT-1207. Henri, callsign “Tucano,” was in two-seat Hawk Mk 109 TL-0501 together with Anton “Tomcat” Mengko.

The two jets reportedly took off at around 09:00 hours to fly a CAP in the southeast Flight Information Region (FIR), which bordered Australian airspace off Darwin, in that country’s Northern Territory. The Hawk mission was coordinated using Ground Control Interception (GCI), via a radar unit at Kupang commanded by Major Lek Haposan.

It was Haposan who alerted Azhar to the fact that two unidentified aircraft had crossed the Darwin FIR boundary at an altitude of 8,000 feet and a speed of 160 knots.

According to the account, the radar operator then requested that the Hawk flight check on what he assumed were helicopters, heading for Dili, the capital of East Timor.

Henri asked Azhar, the flight lead, to use his radar — the single-seat Hawk Mk 209 has the AN/APG-66H pulse-Doppler set, similar to the radar found on the F-16A/B, while the two-seater has no radar — and to verify the contacts’ speed.

The flight lead reported the contacts moving at a speed of 150 knots, then noted that the figure was steadily increasing… 160, 170, 200 knots. The unknown aircraft were now at a distance of around 80 miles from the Hawks. At this point in the account, it is not clear if the GCI was still providing information on the contacts, or if they were being tracked using Azhar’s radar, which would have been very much at the limits of its range.

“Knowing that, I immediately went high and assumed a dogfight position to protect Azhar because I didn’t have radar,” Henri recalled. “I was behind him.”

The two Hawks then climbed to an altitude of 28,000 feet, and by now it was clear the contacts weren’t helicopters, but fighter jets. The flight lead selected a combat mode for his radar and then the unidentified fighters turned directly towards the Indonesian Hawks.

As the contacts came toward them, Henri explains that Azhar identified them, shouting “Hornet” over the radio. The pair of RAAF F/A-18A/B Hornets were presumably flying from RAAF Tindal, a base in the Northern Territory, from where a reinforced RAAF presence was intended to dissuade Jakarta from embarking on any military escalation in East Timor.

According to Henri’s account, Azhar locked on to at least one of the F/A-18s before Henri warned him “We have not declared war!” It seems the Hornets didn’t enter Indonesian airspace at any point.

The Hornets then turned back south toward the Darwin FIR while the Hawk pair returned to Kupang.

Henri then explains that more aircraft began to pour into the Darwin FIR, with another two groups of four fighters each, plus a larger aircraft that he suspected was a tanker.

As soon as he landed, Henri says he ordered the ground crew at Kupang to prepare the radar-equipped Hawk Mk 209 for another flight, requesting a “hot” refueling, in which fuel is pumped into the tanks while the engine is still running. That wasn’t possible, but, after rapidly draining a cup of tea, Henri was able to get airborne in the Mk 209, which was still armed with a pair of AIM-9 Sidewinder heat-seeking air-to-air missiles. It’s not clear whether or not he was accompanied by another Hawk this time.

Airborne again, Henri claims he immediately selected the radar but found it wasn’t functioning. He attributed this to the far more sophisticated electronic countermeasures on the Australian Hornets.

The Australian fighters are then said to have approached to within 20 miles of Henri’s Hawk, as the tense GCI operator at Kupang screamed instructions at him. At this point, Henri realized that his Hawk’s drop tank was not delivering fuel properly, interfering with the jet’s center of gravity and affecting its handling.

Once again, the engagement between Hawk and Hornet was broken off, this time before Henri had made visual contact with the Australian jets.

Henri returned again to Kupang, where senior officers apparently berated him for being too eager to confront the Hornets.

Over the next three days, the Indonesian Hawk pilots remained on alert, but there were no more reports of any more aerial incursions, Henri contends. The pilots were on standby to scramble from 06:00 to 21:00, but in this period activity was often limited to watching transport aircraft arriving to bring in aid to Dili, the aviator recalls.

In the meantime, a multinational International Force East Timor (INTERFET), organized and led by Australia, had been deployed to East Timor to establish and maintain peace. The first INTERFET forces arrived in Dili on September 20 and, by the end of the month, more than 4,000 troops were deployed.

On September 23, 1999, Henri remembers the siren suddenly sounding again and the Indonesian pilots, some of whom had just begun their evening prayers, running to the ready room before jumping into a car that took them to the flight line. In the race to scramble, one of the aviators recalled lacing his boots and strapping himself into the cockpit while the Hawk’s engine was spooled up.

This time, Henri’s wingman was Major Hasbullah, and he explains that they were tasked with catching another unidentified aircraft. Henri reckons the two Hawk Mk 209s were airborne within 12 minutes of the alert sounding, which left the controllers at the base with no time to illuminate the runway.

With no time for a pre-flight briefing, either, Henri decided to speak in Javanese to explain the mission plan to his wingman, since it was expected that the Australians would be listening in on their communications and that they understood Indonesian. Henri quickly realized that Hasbullah didn’t understand Javanese, before the two Hawks then headed north.

Then, according to Henri, a radio call came from the GCI at Kupang, “half screaming,” to announce that a RAAF F-111 had just roared over the base, apparently from the direction of Dili.

Capable of speeds of Mach 1.2 at sea level, the F-111 was clearly well beyond the reach of the subsonic Hawks.

Regardless, Henri and Hasbullah returned to base, carefully noting the waypoints since they had no experience in night flying from Kupang.

For their actions on the 23rd, both airmen were apparently personally congratulated by the commander of the Indonesian National Armed Forces, Soni Rizani, and the incident made national headlines.

It was the end of this brief period of combat service for Henri Alfiandi and he was promoted to the rank of Major later the same year.

East Timor formally declared its independence in May 2002.

Official Australian accounts note that some RF-111C reconnaissance sorties were flown over East Timor between November 5 and 9, albeit with Indonesian approval, marking the only operational employment of the RAAF F-111 fleet. This suggests the reported September 23 mission, if it indeed took place, may not have been authorized by Jakarta.

Ten years after the standoff in East Timor, Henri was Indonesian Air Attaché in Washington D.C., where, by a remarkable coincidence, he claims to have met one of his antagonists from 1999, during a round of golf.

“Henri, where were you in September 1999?” the Australian Air Attaché apparently asked him, before explaining that he had been the pilot of the F-111. “I just wanted to test your combat readiness,” the Australian reportedly told Henri. It’s a surprising twist to an equally surprising story, but at least one ex-RAAF F-111 pilot served in this capacity at the time, so it’s quite possibly an authentic account. 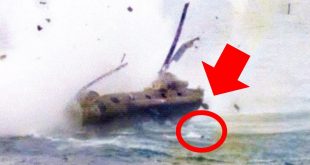 Watch: Pilot Jumping Out Of A Stolen Helicopter As It Crashes Into The Sea

Credits: Dark Footage / Youtube At the end of the Vietnam War, Saigon was forced …