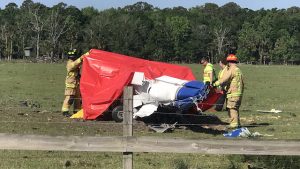 The plane belong to  Embry-Riddle Aeronautical University and it was on flight  training  mission when shortly after takeoff from Daytona Beach International Airport, it crashed

The plane crashed about 25 yards west of Tomoka Farms Road, near the Daytona Flea & Farmers Market.

plane crashed calls came in at 9:54 a.m. with witnesses saying they saw a wing fall off a plane before it crashed.

The wing was across Tomoka Farms, to the east and 150-200 yards from the rest of the mangled fuselage.

Ginger Pinholster Embry-Riddle Aeronautical University spokesperson said that  “We are devastated by today’s tragic aircraft accident that has taken the lives of one of our students as well as another member of the aviation family, an FAA-designated pilot examiner, “We are devoting every ounce of our energy to learning the details of what happened, and we are working closely with authorities to do so. … Our entire community is heart-broken. Our deepest sympathies go out to all those affected by this devastating loss.” 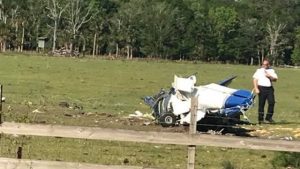