The helicopter made an emergency landing in a public park after a rotor blade was damaged. The blade clipped the structure of ferry during an anti-terrorist training exercise. There were no injuries.

The Black Hawk, operated by 6th Aviation Regiment from Luscombe-Holsworthy AAF (NSW) was damaged during an exercise over Sydney Harbour and was forced to land. As you can see on the photo, the tip of one of the rotor blades was damaged.

The Black Hawk helicopter was on a counter-terrorism training drill over the harbour yesterday afternoon when it’s understood to have clipped a defence-leased ferry.

It was forced to make an emergency landing in a public park in Watsons Bay, with footage showing damage to several of the Black Hawk’s rotor blades.

A Defence spokesperson said no civilians or defence personnel were injured.

The aircraft remained at Robinson Park overnight under guard to allow engineers to conduct further inspections and seek technical advice as part of the investigation. 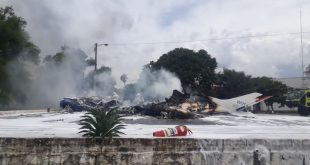 Credits: La Prensa del Táchira A Cessna 402B of the Fuerza Aérea Paraguaya has crashed …