“The helicopter was flying very low and getting lower until it crashed with a very loud sound,” said Eka, a witness quoted by Kompas TV. “Two passengers escaped before it crashed and after that there were three or four explosions.”

Brigadier General Nefra Firdaus, said that the helicopter with registration number HA 5141 crashed during the second mission of training.

One witness at the scene, Sarwono, saw the plane fly at an altitude of about 20 meters. 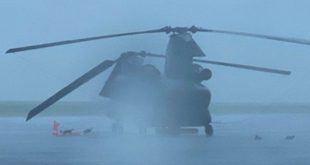