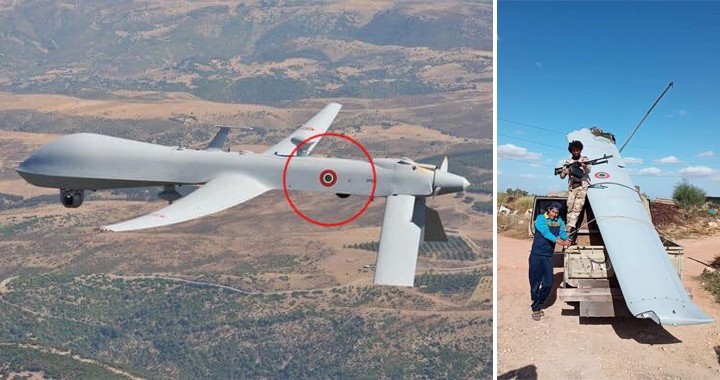 LNA forces have claims to have shot down Italian Air Force General Atomics MQ-1 Predator near Tripoli over the town of Tarhunah in western Libya.

Libyan sources released several photos showing the wreckage of the downed UAV. The insignia of the Italian Air Force can be clearly seen on the UAV’s wings.

#LNA seems to have shot down MQ-1 Predator UAV operated by the #Italian Air Force while it was flying over north of #Tarhouna city southern #Tripoli. pic.twitter.com/9XlsdeydLG

A source in the Libyan National Army (LNA) told the al-Marsad newspaper that the army shot down the UAV believing that it was being operated by the Turkish Air Force. These claims have not been verified yet.

Here is a video that is said to show the moment a drone targeted by the #LNA was falling down and crashed in the vicinity of #Tarhouna pic.twitter.com/nABu6HeBGm

While showing an Italian Air Force drone, the photographs don’t show an MQ-1 as some sources have reported: they actually show what remains of an MQ-9A Predator B, operated by the 32° Stormo (Wing) of the Aeronautica Militare (Italian Air Force), based at Amendola Air Base, in southeastern Italy.

The 32° Stormo and its two-child units, the 28° Gruppo (Squadron) based at Amendola, and the 61° Gruppo, detached to Sigonella, in Sicily, operate a mixed fleet of MQ-1C Predator A+ (an upgraded variant of the baseline RQ-1B Predator A) and MQ-9A Predator B RPVs (Remotely Piloted Vehicles).

Along with the “standard” ISR (intelligence Surveillance Reconnaissance) missions, the Italian Predators have supported MEDEVACs (Medical Evacuations), TIC (Troops In Contact) operations, IED (Improvised Explosive Devices) monitoring, Convoy Escort in Iraq and Afghanistan; they have supported Operation Unified Protector in Libya, Mare Nostrum operation in the Mediterranean Sea near Lampedusa and, from Djibouti, have monitored the seas off the coast of Somalia in anti-piracy missions.

They are also currently deployed to Kuwait to support the US-led anti-ISIS operation in Syria and Iraq. Leveraging their persistence on the target area, the drones have also supported Police forces during major events.